A Lighthouse in the Sea of Time 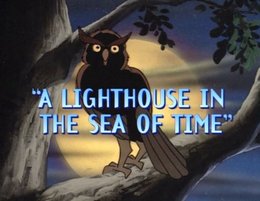 "A Lighthouse in the Sea of Time" is the seventeenth televised episode of the series Gargoyles, and the fourth episode of Season 2. It originally aired on September 6, 1995.

The Scrolls of Merlin are being escorted by Elisa and Matt to the Metropolitan Museum of Art when their boat is ambushed by Banquo and Fleance who have been sent by Macbeth to steal the scrolls. Hudson secures one of the two scroll canisters from Banquo's jet, but is rendered unconscious and falls into the ocean. He washes ashore near the house of the blind author Jeffrey Robbins, and the two become friends. Meanwhile, Broadway attempts to take back the other canister at Macbeth's place, but Macbeth stops him and captures him. He then takes the other canister from Hudson's stone form on Robbins' terrace. Believing the scrolls contain magic spells, Macbeth begins to open them while Hudson and the rest of the clan converge at Macbeth's house. When Macbeth realizes that the scrolls contain Merlin's diary instead of spells, he loses interest and allows the gargoyles to leave with them.

The two archaeologists Lydia Duane and Arthur Morwood-Smyth come across a chest containing the Scrolls while exploring a cavern. The chest contained an enchantment put in place by Merlin to ensure the one who found the scrolls is a seeker of knowledge rather than a destroyer.

Broadway doesn't believe he needs to learn how to read because he has such an exciting life. He changes his tune during the course of this episode, however. After he's taken prisoner, Macbeth describes to him some of the written exploits of Merlin. Broadway is so impressed with Macbeth's narrative that he thinks the former king actually lived during that time period. When Goliath threatens to burn the Scrolls in exchange for Broadway's freedom, Broadway pleads with Goliath not to destroy them since he finally understands the magic inherent in the written word.

Hudson is also unable to read, and doesn't pursue learning to do so because he is ashamed. Robbins convinces him of the importance of reading, and that one is never too old to learn. Hudson is amazed when Robbins directs him to Macbeth's mansion with a telephone book.

Robbins is a Vietnam veteran and a semi-successful writer, though he hasn't written anything in a while. The discovery of The Scrolls of Merlin sparks an interest in him and he begins working on a new novel.

"Och, leave me out of this. It's time for Celebrity Hockey." - Brooklyn and Hudson

"You can't read, can you?" - Hudson and Robbins

"I understand. But it isn't shameful to be illiterate, Hudson. It's only a shame to stay that way." - Hudson and Robbins

"Oh, I've run you off with my preaching." - Hudson and Robbins

Hudson and Broadway, both illiterate prior to this episode, decide to learn how to read. Later episodes, such as "High Noon", show them practicing together.

Macbeth's two henchmen, introduced in this story (they would reappear in "Sanctuary", "Pendragon", "Nightwatch" and "The Journey"), are never named in the dialogue, but the ending credits list them as Banquo and Fleance. Both names are taken from Shakespeare's Macbeth; in the play, Banquo is a leading Scottish nobleman and Fleance his son. After Macbeth learns from the three Witches that Banquo's descendants will someday rule Scotland, though Banquo himself never will, he turns upon his former friend and has him murdered; Fleance escapes, however, and his descendants indeed come to rule Scotland in the form of the Stuart dynasty (among whose members was James VI of Scotland and I of England, under whose reign Shakespeare wrote Macbeth).

Macbeth provides another Shakespearean link directly in the dialogue when he goes by the alias of Lennox Macduff. As Jeffrey Robbins explains to Hudson, Lennox and Macduff are two characters from Shakespeare's Macbeth: Lennox plays only a small part as one of several Scottish thanes, but Macduff occupies a more prominent position as the man who will slay Macbeth at the end. (Lennox and Macduff both enter together in Act II, scene iii, directly after the Porter scene - and providing the knocking at the door that the Porter was answering.)

When Goliath mentions that the public library adjacent to the clock tower contains several books on Merlin, it was originally planned that he would list a few of these, such as Mary Stewart's The Crystal Cave. However, the production team was unable to secure legal permission to name these books, and so dropped the list.

Gilly, Jeffrey's seeing-eye dog, was named after Gilgamesh, a legendary king of the city of Uruk in ancient Sumer (though Gilly is referred to in the dialogue as female). The novel which Jeffrey shows Hudson in this episode is entitled Gilgamesh the King, and was apparently a retelling of his myth; presumably this was why Jeffrey bestowed Gilgamesh's name on his dog.

The archaeologists Lydia Duane and Arthur Morwood-Smyth who discover the Scrolls at the beginning were named after no less than four Gargoyles writers: Lydia Marano, Diane Duane, Arthur Byron Cover, and Peter Morwood. They would reappear (in a far less Arthurian context) in "Sentinel".