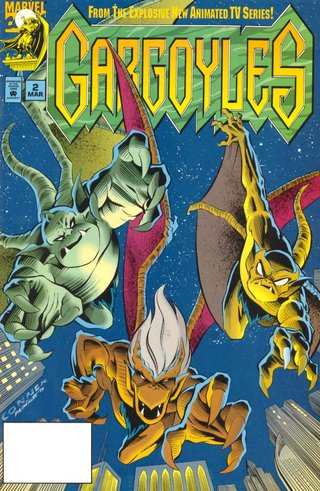 "Always Darkest Before Dawn" is the second issue of the non-canonical Gargoyles comic book published by Marvel Comics. It was released in March, 1995.

While the Trio are out helping Lexington test a new gadget, they encounter Tony Dracon's men committing a murder. Because dawn is fast approaching, Broadway and Brooklyn quickly find a place to roost, but Lexington can't resist the temptation to follow Dracon's men back to their penthouse. Just before the sun comes up, he finds a place to roost among some other statues on Dracon's terrace. Towards nightfall, Dracon's butler notices something strange about the statue, and alerts Dracon, who says it sounds like one of the creatures that attacked him in "Deadly Force". The issue ends with a cliffhanger in which Dracon is about to smash Lexington to pieces with a fireplace poker.

The gadget which the Trio are helping Lexington test is a tracking device, similar to a wristwatch, which each of the Trio wears, and will enable them to track where the other members are at any time.

The murder the Trio witness is of a business associate of Dracon's, who was supposed to be selling some more of his stolen weapons. Dracon believed the associate had been withholding some money for himself, which is why he ordered him killed. The associate's girlfriend, LaVonne also witnesses the event, so Dracon's men capture her too, and sell her to David Xanatos to be used in his experiments.

When Dr. Phobos receives the new test subject, he informs Xanatos that he has no need of any more test subjects, and reveals what Xanatos' plan has been: to breed their very own gargoyle (which Xanatos did end up doing in the canon episode "Double Jeopardy". Unlike in the canon episode, Dr. Phobos used DNA collected from the laboratory wreckage in the previous issue).

While the gargoyles roost that day, Elisa is assigned to work on the murder. The only witness to the crime is a street walker, who gives the police a sketch that matches one of Tony Dracon's men. But when she also tells how the gargoyles broke up the crime, Captain Chavez orders Elisa and Matt to keep a lid on it, on the grounds that the D.A. will consider the witness uncredible if she starts talking about gargoyles.

During the day, Broadway and Brooklyn are carried off by construction workers who have been ordered to remove all the stone statues from the building: the church they chose to roost on is being knocked down, and the owner has chosen to sell all the statues to make money. The "In the next issue" section at the end of the issue explains that Broadway is carrying the only piece of evidence which can tie Tony Dracon to the murder: a bullet he picked up at the scene of the crime.

When Elisa realizes she can't solve the case without the gargoyles' help, she goes to find them, and realizes the Trio are missing.

Matt is taken off duty when he starts to get dizzy spells after failing to take pain meds following an accident he had in the previous issue. His reason for not taking the meds is because they rendered him unable to do his job.

Elisa's sister Beth appears at Elisa's job, asking her for a place to stay after she gets into a fight with their parents.

The murder by Dracon's men, the presence of the street walkers as the only witnesses to the crime, and Dracon's selling of LaVonne to Xanatos, all underscore the darker tones of the Marvel comic series, as opposed to the canon material. This is especially true in LaVonne's case, as Dracon remarks that she "says she's 20, but I figure it's more like 16," and Owen comments on how she's a runaway who was never reported missing, so "she won't be missed."

The news media reports on the destruction of the ship which took place in the previous issue, and mentions rumors that a secret laboratory belonging to David Xanatos was on that ship, but that police are unable to prove it. Here, Xanatos is portrayed as an industrialist whom the public suspects of being sinister, although they are unable to prove it. By contrast, the canon material largely portrays him as a figure admired by the public, who keeps his sinister side a secret from them (with the exception of his prison sentence beginning in "Awakening: Part Five").

Dracon's immediate suspicion that the statue on his terrace is a gargoyle may seem inconsistent with his behavior in the canon material, in which the audience is never given any indication that he's aware the gargoyles turn to stone during the day. However, the following issue explains that Dracon thought Lexington was just trying to camouflage himself among the other statues. Also, Dracon's butler does notice that Lexington is still wearing his tracking device, and that may give Dracon a clue that something is unusual about this statue. However, he does discover in the following issue that gargoyles turn to stone during the day, which seems to be inconsistent with following canon episodes.

True to the cinematography of Gargoyles, these comics feature landmarks which really do exist in New York. This issue features the famous Flatiron Building, which was later featured in "The Gate" and "Phoenix".

This issue gives a name to one of Dracon's men: Drew Crenshaw, also known as "Snitch".

This issue depicts Elisa being overworked and not getting enough sleep due to her having to work long hours at her job. This sentiment is repeated in the canon episode "High Noon".