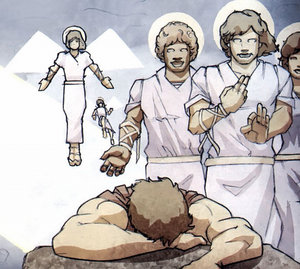 Angel - A supernatural being common to many religions often shown as attendants and protectors of humans and messengers or servants of a greater deity. The four greatest angels in Christian folklore are known as Archangels.

According to Shari, when Jacob laid his head upon a stone after fleeing his wrathful brother Esau he had a vision of angels climbing a ladder into heaven. ("The Rock")

Throughout history, from time to time winged mortals (such as gargoyles and Sphinx) have been called angels due to their beauty, their forms and/or their protective natures. Goliath called Demona his Angel of the Night, (or simply Angel) during their time as mates. Later, Katharine, Tom and the Magus would end up naming many of "The Eggs" after specific angels or other angelic names such as Angela or Archangel. [1] Thailog also referred to both Demona and Delilah as "my angel" as well. ("Vows", "Avalon Part One", "Bash", et al.)