Difference between revisions of "Captain of the Guard" 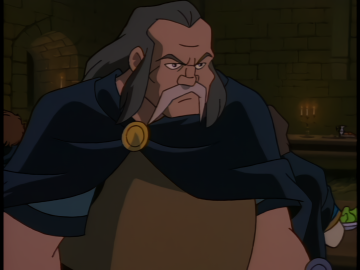 The Captain of the Guard

The Captain of the Guard was the leader of the human garrison at Castle Wyvern in the 10th century.

The Captain's given name was Robert, better known as Robbie. [1] He was born in 946. [2] He came from peasant stock, and, as a youth, became a friend to Prince Malcolm while the young prince was a prisoner of King Indulf of Scotland. Robbie helped Malcolm escape from Indulf in 962, and became a mentor-figure to him thereafter. By 967, Robbie had made contact with the Wyvern Clan, and probably the Loch Ness Clan and Scone Clan as well. In 971, he introduced Prince Malcolm to Hudson and the other Wyvern gargoyles, and helped bring about their alliance. After Castle Wyvern was built, he became its Captain of the Guard. ("Once Upon A Time There Were Three Brothers...")

A plain bulldog-faced man, the Captain identified much more closely with the gargoyles than with his fellow humans, and came to be ostracized by his people for it. He felt disgusted with how Princess Katharine and her people continually snubbed the gargoyles and showed not the slightest bit of gratitude for their protection.

At last, by 994, he had had enough. The last straw was when Princess Katharine demoted him for bringing Goliath and Demona to a banquet, decreeing that he was to report from then on to the Magus rather than directly to herself. The Captain bitterly decided to turn the humans over to Hakon and his Vikings, to punish them for their treatment of the gargoyles, and so that the gargoyles could have Castle Wyvern to themselves. With Demona as his ally, he betrayed the castle to the Vikings.

However, the Captain's plan went awry. He and Demona urged Goliath to take the entire clan to pursue the Vikings, planning to let Hakon sack the castle in their absence. But Goliath decided to only take Hudson with him, leaving the rest of the gargoyles behind to guard the castle. In desperation, the Captain changed his plan to have the Vikings take Castle Wyvern in the daytime, but Hakon promptly destroyed the clan in its stone sleep. The Captain watched in horror, but did not dare to act and save the helpless gargoyles. ("Awakening Part One", "City of Stone Part One")

When Goliath and the other survivors attacked the Vikings' camp to rescue their prisoners, Goliath discovered the Captain's treachery and was enraged. In the ensuing confrontation, the Captain and Hakon fell off a cliff to their deaths. ("Awakening Part Two") But, because of a combination of the ancient magics of the Archmage's cave close by and the force of the two men's hatred for each other (alongside Hakon's hatred for Goliath and the Captain's self-hatred for having failed to save the lives of his friends), they survived on as ghosts, condemned to haunt the cave.

Near the end of 1995, an older Tom (now Guardian) arrived to Wyvern Hill from Avalon and explores the area including the caverns. As the Guardian talks to himself, The Captain and Hakon suspect that their target may still be alive.[3]

In early 1996, when Goliath and his companions arrived at the former site of Castle Wyvern as the first stop upon the Avalon World Tour, the ghosts of the Captain and Hakon decided to take advantage of their arrival as a means of regaining their old lives. Deep in the Archmage's Cave, they drove Goliath to a state of near-madness with illusions designed to remind him of the Wyvern Massacre and play upon his guilt over having helped bring it about by leaving the clan behind. They then began to use the magic of the Megalith Dance to transfer Goliath's life-force to themselves, allowing them to solidify while Goliath would be reduced to a ghostly condition. [4] But the Captain in the end was unwilling to bring further suffering upon Goliath, and foiled Hakon's scheme instead, thus redeeming himself and winning release from the cave. ("Shadows of the Past")

The name Robbie (spelled "Robby") was one of the names used in early drafts of the script for "Awakening" for the peasant boy that would eventually be named Tom. [5][6][7]