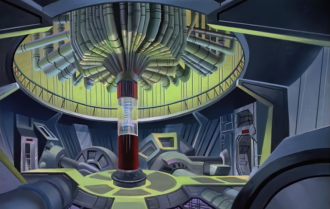 Cybots are robots developed by Cyberbiotics, used in particular to man Fortress-2.

After the destruction of Fortress-1, Halcyon Renard invested his fortune into building a new ship manned entirely by Cyberbiotics' newly patented cybots. Having all mundane ship functions performed by cybots eliminated any possibility of human error, which Renard claimed was the reason for the destruction of Fortress-1. During Fortress-2's maiden voyage, the cybots were working perfectly aboard the ship until Preston Vogel initiated Voice Override V7R9, and infected the cybots with a program that caused them to follow Vogel's orders and attempt to destroy Fortress-2. Renard and Goliath (who was aboard the ship at the time) together battled many cybots, but realized they would need to shut all of them down at once. Renard instructed Goliath to destroy the cybots' power source in the heart of the ship, which Goliath was able to do. Meanwhile, Renard was able to stop the destruction of the airship (and the Cyberbiotics Tower) without hindrance from the powered-down cybots, and Vogel confessed to the sabotage as per Fox's instructions. The cybots were repaired and reactivated shortly thereafter. The next year, Renard used the yellow cybots during the battle with Oberon in New York City to temporarily imprison him, and force him to use up much of his magical energy. Oberon managed to bring the cybots down (not to mention Fortress-2 itself) by summoning freezing rain upon them. ("Outfoxed", "The Gathering Part Two") 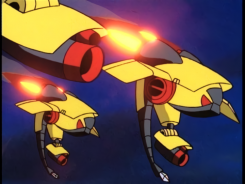 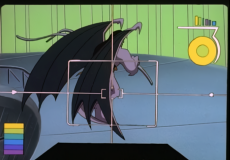 Yellow Cybots - These small, yellow cybots are mainly defensive robots. They are capable of flight and possess an energy cannon and a grappling hook. Though not esspecially strong or difficult to destroy on their own, in large numbers they are quite formidable. Moreover, a group of them is capable of creating an energy cage, as they did with Oberon. They used the cage to drain his energy. 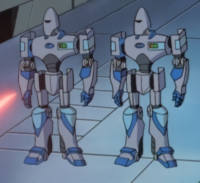 Gray Cybots - These cybots are the most humanoid looking. They seem to be mainly used for ship functions most commonly performed by a human crew such as piloting.

Red Cybots - These boxy cybots have been seen performing mundane ship duties such as basic mechanical work and physical tasks. 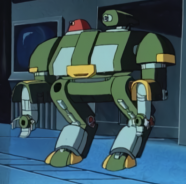 Green Cybots - The large, green cybots are used mainly for ship security. They possess several energy weapons and seem to be relatively strong.