Difference between revisions of "Edward the Confessor" 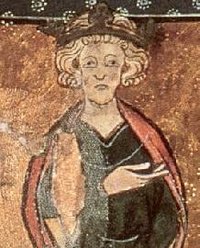 Edward the Confessor was the King of England from 1042 to 1066. He is the son of Aethelred the Unready and Emma of Normandy making him Princess Katharine's cousin.

Edward would become King in 1042 after his half-brother, the King Hardicanute, dies on his wedding day (perhaps due to poison). Immediately after becoming King, he locks up his mother, Emma, in a nunnery.[1]

In 1057, Canmore defeated Macbeth and seized the Scottish throne, with help from the English. Westminster Abbey, built by Edward the Confessor, was consecrated just a week before he died of natural causes. He was succeeded in 1066 by his brother-in-law, Harold Godwinson. [2][3]

Edward the Confessor was the son of Ethelred the Unready (978-1016) and Emma of Normandy, the daughter of Duke Richard of Normandy. In 1016, after his father was overthrown by Canute of Denmark (who then ruled England from 1016 to 1035), Edward fled to his mother's homeland of Normandy, and remained there until the death of Canute's son Harthacanute in 1042. After Harthacanute's death, Edward returned to England and became King. Edward was dominated by the powerful Earl Godwin of Wessex (whose daughter Edith he married) and his sons during the early part of his reign; he banished them temporarily in 1051, but they returned to favor soon afterwards. Thanks to his youth in Normandy, Edward preferred the Normans over the English, and had many Norman favorites at his court; he also promised the throne of England after his death to his cousin, Duke William of Normandy.