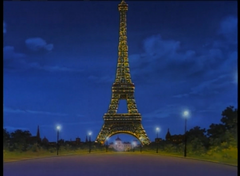 The Eiffel Tower is one of Paris's most famous landmarks. It is located on the Champ de Mars, and directly below it is the Redemption Squad's headquarters.

In 1920 when Demona activated the Praying Gargoyle, she was defeated by Joshua Sweet when he dropped the statuette off of the Eiffel Tower. ("The Last")

Elisa wanted to visit the Eiffel Tower, but ended up following Macbeth and Demona instead when she saw them in Paris. ("Sanctuary")

By 1996, Monsieur Le Maire and the Director have set up a base for the Redemption Squad beneath the tower. ("Estranged") 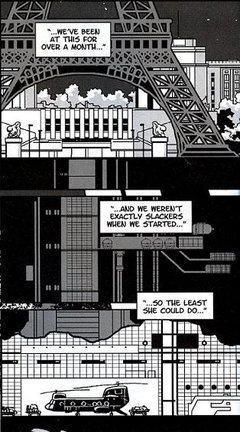 The Redemption Squad's headquarters is directly beneath the Eiffel Tower. It features a hanger for their helicopter, the Redemption (although at least three automobiles are stored here) as well as a training room, and living areas.

The Eiffel Tower, which is the tallest building in Paris, is the single most visited paid monument in the world; millions of people ascend it every year. Named after its designer, engineer Gustave Eiffel, the tower was built as the entrance arch for the 1889 World's Fair.

The tower stands at 324 m (1,063 ft) tall, about the same height as an 81-story building. It was the tallest structure in the world from its completion until 1930, when it was eclipsed by the Chrysler Building in New York City. Not including broadcast antennas, it is the second-tallest structure in France, behind the Millau Viaduct, completed in 2004.

Greg Weisman wanted to do something with the Eiffel Tower in his memo for "Sanctuary", but apparently was not able to make it work. The tower is seen in the opening of the episode, however. [1]