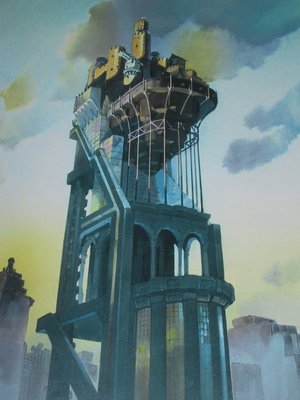 The Eyrie Building is David Xanatos' personal residence and headquarters and the home of the Manhattan Clan. 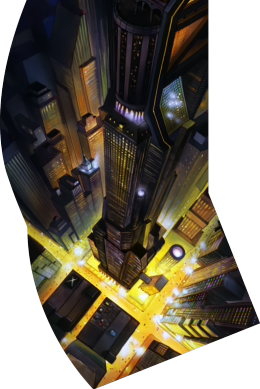 The base of the Eyrie Building 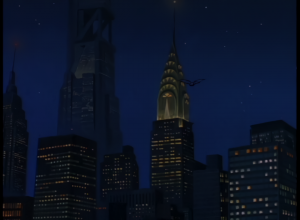 The bulding from a distance

The Eyrie Building is a massive skyscraper in New York City located on Central Park South, directly across from Central Park. ("Invitation Only") As of 1995 it was the world's tallest building. It serves as the base of operations for Xanatos Enterprises and the more mundane function of a regular office building.

Xanatos built the Eyrie Building in the early 90s both as a personal home and a corporate headquarters. More than that, however, he built the huge tower to place Castle Wyvern at its pinnacle in order to raise it above the clouds and thus awaken Goliath and his clan from their stone sleep. The Castle was then used as a sort of medieval penthouse. ("Awakening Part Two")

It is likely that Xanatos Construction played a major part in building the skyscraper, as well as moving Castle Wyvern atop it. The building was completely constructed by the fall of 1994 when the Manhattan Clan awoke there. The Clan left the Eyrie Building several months later to live at the clock tower. ("Enter Macbeth") Through 1995 and 1996 the building was home to the Mutates and Thailog for a time. ("The Cage", "Double Jeopardy") Fox and Owen Burnett also live there. Xanatos and Fox were married at the Castle, and in 1996 Alexander Fox Xanatos was born there. The Manhattan Clan moved back to the Castle in October 1996 and now live there with Owen and the Xanatos family. ("Vows", "The Gathering Part One", "Hunter's Moon Part Three")

The Eyrie Building will still be standing in 2198, though by that time it will have undergone many renovations and be known as the Eyrie Pyramid. The building will be owned by the LX Corporation and still be the biggest and tallest building in Manhattan. The Manhattan Clan will still be living in Castle Wyvern. 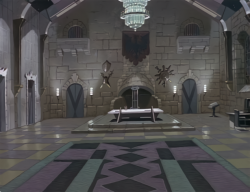 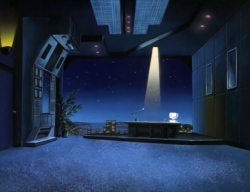 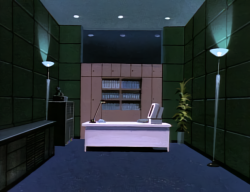 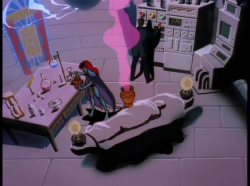 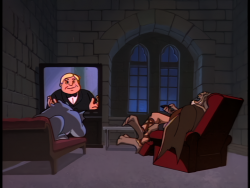 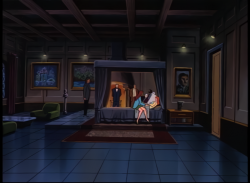 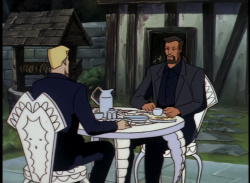 The well and shed behind the patio

When Xanatos moved Castle Wyvern from Wyvern Hill in Scotland to Manhattan he rebuilt it to pristine condition, repairing the ruin and decay the structure had endured while it was abandoned for a thousand years. More than that however, he modernized the Castle. ("Awakening Part Two")

The Great Hall, once the site of meals and entertainment for the royal court, was converted into a sort of main room or foyer. It seems all or most elevator access to the Castle from the rest of the Eyrie Building now comes there. The room is decorated with tapestries and for a time the Grimorum Arcanorum was stored there in a glass case. A main desk is present in this room and sometimes smaller desks, tables and/or chairs and other furniture is kept here. There exists a secret entrance to this room on the south wall.

A separate large dining room (with a working fireplace) was created elsewhere in the Castle. Presumably nearby was a large and very modern kitchen with walk-in freezers and enough space to prepare meals for many guests. In another area of the Castle is the "TV room". This small room has been used by the gargoyles for reading, watching television and relaxation. There is also a large library somewhere within the Castle. The library has two levels. A fully functional infirmary is present in the Castle. Fox probably gave birth to Alexander here and Goliath was taken here to be treated by Doctor Sato when he was wounded by Thailog on Halloween, 1996. ("The Gathering Part One", "Bash") The tower of the Castle once belonging to the Archmage and later the Magus has been converted into a laboratory. It was there that Coldstone was first awakened. ("Reawakening") Elsewhere in the Castle is a large room with many pillars. As there are no windows, it is assumed this is one of the lower levels. Xanatos set up the Cauldron of Life and imprisoned Hudson here. ("The Price") Xanatos' and Owen Burnett's offices are located in the Castle as well. The gym and the control room used to operate the buildings defenses (see "Defenses" below) are probably located in the Castle as well. The front courtyard is often used as a helicopter landing site, though it is not the main helipad for the building (see "Helipad" below). It is unknown if the rookery or any part of it survived the move and reconstruction of the Castle, but it is possible.

There is a patio located outside the Great Hall where the Family Xanatos and their guests can enjoy a meal on a nice day. ("Double Jeopardy")

As the Family Xanatos choose to reside in the castle, there is at least one master bedroom that has been refurbished with wood walls and decorated with various pieces of artwork. The master bedroom also features a working fireplace (the room used to be Princess Katharine's). Alexander has his own bedroom in much the same style. It is presumed that Owen also has living quarters in the castle.

Due to the many battles that have taken place here, sections of the Castle have had to be rebuilt several times, under Owen Burnett's supervision. ("Masque") 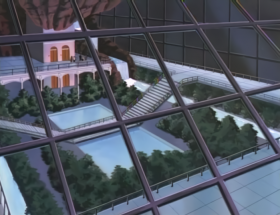 The Atrium below the castle.

The Atrium is a large area located in the large space beneath Castle Wyvern. It is surrounded by glass windows and contains lush foliage and an artificial waterfall and stream with a bridge over it, as well as an olympic-sized pool. Macbeth and Demona were enslaved here by the Weird Sisters and later the Coldtrio found their way into their new bodies here. ("City of Stone Part Four", "Possession") The Atrium was also where Anastasia Renard, Halcyon Renard, Petros Xanatos, and Preston Vogel waited for news of Alexander's birth. In 1996, many New Yorkers attended Xanatos' Masque Halloween party in the Atrium. ("The Gathering Part One", "Masque", "Bash") 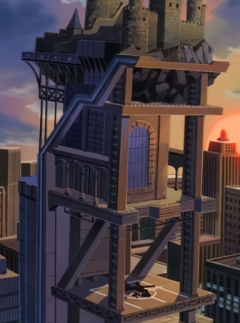 The Helipad and Building's North Side

On the North side of the building below the atrium is a large helicopter landing area. Though helicopters have often used the Castle Wyvern courtyard as a landing site, this area seems to be the dedicated helicopter storage and maintenance location. 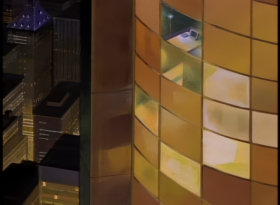 The bulk of the building composing the lower two thirds of the Eyrie is office space. Many Xanatos Enterprises employees work here. Xanatos himself and Owen Burnett both have private offices of their own, however these are located far above inside Castle Wyvern. 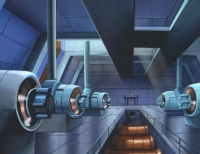 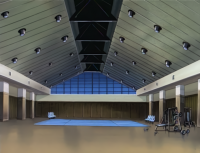 Other places of note in the Eyrie building include a huge generator room to power the vast energy needs of the building and a large gymnasium. The gym is probably located in Castle Wyvern, though given its size and the lack of evidence (stone walls, etc.) it could be elsewhere in the Eyrie.

The building's entrance (being protected by the force field.

The Lobby of the Eyrie Building is fairly standard. Many elevators lead here and there are also several massive staircases leading up into the building. At least one guard is on duty here. 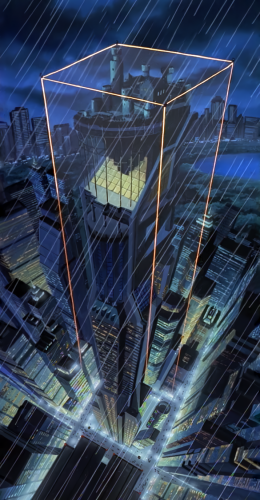 In 1995, several additions were made to the Eyrie Building in the name of defense. First, powerful energy cannons were added to several of the turrets of Castle Wyvern. These cannons were mostly destroyed by Talon and the Trio in 1996, it is unclear if they were rebuilt or replaced by superior guns. Also that year, Owen Burnett authorized construction of a energy shielding system to prevent attacks and access to the building. This was mainly done to keep Oberon out, though Oberon eventually was able to bring down the shields by going under the building (the shield stopped at street level) and destroying the generators powering it. ("Kingdom", "The Gathering Part One", "The Gathering Part Two")