Difference between revisions of "Frank Welker" 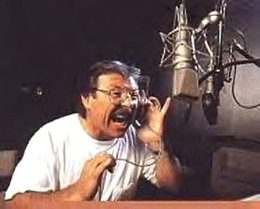 Frank Welker is the voice actor who played Bronx, Cagney, and other characters on Gargoyles. He also provided additional voices for Darkwing Duck and W.I.T.C.H.

Frank Welker is widely known as one of the most prominent and prolific voice actors in the business. Born in Denver, Colorado in 1945, Welker started out as on onscreen actor and later switched to primarily doing voice work. Among his most well known credits are Freddy Jones from Scooby Doo, Where Are You!; Megatron, Soundwave, Galvatron and other characters on The Transformers, and Dr. Claw and Brain on Inspector Gadget. Welker is equally famous for his ability to perform roles that consist of inarticulate noises, such as dog barks, cat meows, alien roars and shrieks, telephone dial tones, and so on.

Role on The Goliath Chronicles