Difference between revisions of "Gabriel" 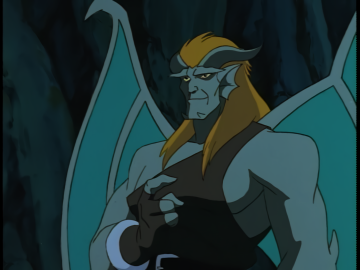 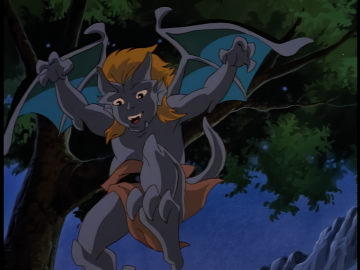 Gabriel In His Youth On Avalon

Gabriel is a member of the Avalon Clan, and also the leader of the clan. [1]

Gabriel's egg was laid in the Wyvern Clan rookery in 988 and was due to hatch in 998. Due to the Wyvern Massacre however, Princess Katharine, the Magus, and Tom were forced to take all the rookery eggs away in 994. The next year, on September 28th 995, they took the eggs to Avalon. ("Avalon" Part One) Because of the difference in the flow of time there, Gabriel did not hatch until 1058.

Princess Katharine, the Magus and Tom raised the "Eggs" as their children and Gabriel grew up on Avalon, with his rookery brothers and sisters, in peace and isolation from the world. Eventually, he emerged as the natural leader of the Clan. [2] He chose Angela, his sister and close friend, to be his second-in-command. [3] By 1995, he had become romantically involved with Ophelia. [4][5]

When the Archmage attacked Avalon in 1995, Gabriel boldly took part in the defense of the island against him and his allies (including his rookery mother Demona). ("Avalon" Parts Two and Three) When Oberon returned to Avalon in 1996, he chose Gabriel along with Goliath and Angela to fight him for the right to live on the island. Ultimately, the gargoyles were defeated, but after Tom subdued Oberon but refused to kill him, Gabriel and his clan were granted their request to stay on the Island and became Avalon's Honor Guards. ("Ill Met By Moonlight")

After Angela left the Clan, Gabriel appointed his mate, Ophelia, to be his new second-in-command. [6] He is still living on Avalon with the other gargoyles there.

As less then a decade will have passed on Avalon between 1996 and 2198, it seems likely that Gabriel will still be the clan leader at that time. If so, he will be among the gargoyle leaders present at Queen Florence Island when the Space-Spawn attack and will be placed in stasis by them. Greg Weisman has said it is probable that Gabriel will appear in the Gargoyles: 2198 spin-off, which reinforces this idea. [7]

Gabriel's biological parents are Othello and Desdemona, though this matters to no one (except perhaps Angela). Gabriel is a strong gargoyle possessing traits from both his biological parents. From his mother he inherited his hair coloring, and from his father he inherited his skin coloring and ear shape. His wings and horns seem to be amalgams of both his parents' features. He also has interesting brow ridges, two small horns on his chin, and two spikes on the end of his tail none of which his parents have (though Othello has a club on the end of his tail). It has been theorized that these traits come from a biological grandparent.

Gabriel was named after the Archangel Gabriel, one of the four great Archangels of Abrahamic lore (the other three being Michael, Raphael, and Uriel). In the Bible, Gabriel was the messenger from Heaven who informed the Virgin Mary that she would give birth to Jesus. (Luke 1: 26-38) Accroding to Islamic belief, Gabriel is the angel who dictated the Qur'an to the prophet Mohammad. He also appears in Milton's epic poem Paradise Lost, where he is the captain of the angels serving as guardians to the Garden of Eden (an appropriate role, in light of the Gabriel of Gargoyles and his clan similarly serving as guardians to the paradisaical isle of Avalon). [8]