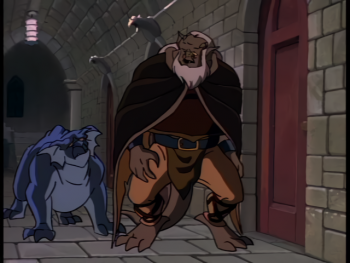 A young beast and an elder gargoyle. The two extant gargate species.

Gargates are a class of animals best known for the process of stone sleep. The only two species still in existence are gargoyles and gargoyle beasts. The term "gargate" was first coined by Dr. Anton Sevarius. [1]

The exact origins of gargates lie so far back in the mists of time that we have no certain details as to how they came about. However, what evidence we have suggests that they are descended from reptiles of the Paleozoic or Mesozoic Eras, possibly pterosaurs or the "mammal-like reptiles." They first originated on Earth's super-continent of Pangaea. [2] It is certain, at the least, that they are native to this world rather than extra-terrestrials, and that they arose through the same natural causes as mammals, rather than being the creation of magic. [3][4]

Aside from stone sleep, gargates are further distinguished by their glowing eyes and long reproductive cycles. They all lay eggs and nurse their young, which suggests a common heritage with early mammals. Both extant species exhibit a high level of intelligence.

The term "gargate" was invented by Greg Weisman many years ago and has been widely used by him and the fans, it even was mentioned by Greg in 2004 during the commentary for the "Awakening" five-parter on the first season DVD set. The term, however, was never used in the Gargoyles Universe until Sevarius said it in "Louse".