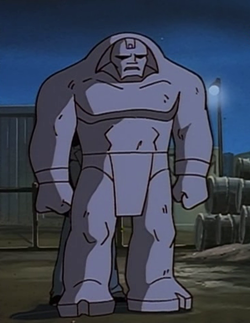 The Golem is a gigantic clay statue brought to a condition of semi-life by Rabbi Loew in Prague, in the year 1580. Other Golems may very well have been brought to life over the centuries. [1]

The Rabbi created and activated the Golem to defend the Jewish community in Prague from its enemies. At some later point, the Golem was de-activated and stored in a chamber of the synagogue where it had been created; it remained there until 1995, when Max Loew was urged in a dream to re-activate it, to use it to protect Prague from Tomas Brod and his followers. However, just as Max was in the process of doing so, the Golem was captured by Brod, acting on Halcyon Renard's instructions.

Renard used a cabalistic spell to transfer his soul into the Golem's body, in the hopes that this would allow him to escape his eventual death from his debilitating disease. Once housed in the Golem's body, he ran amok, leaving a trail of destruction throughout Prague, until at last Goliath and Max Loew brought him to his sense. Renard returned his soul to his own body, and Max led the Golem to a construction site that Brod was raiding, where it defeated the gangster. The Golem presumably still patrols Prague, defending it against its enemies, while guided by Max. ("Golem")

The Golem is not truly sentient. [2] It can act on its own, but has shown no capacity for speech, and needs to be directed by Max, and occasionally restrained; Max had to stop it from actually killing Brod, for example.

In Jewish folklore, golems were artificial clay men, brought to life through cabalistic magic; a particularly important step of the ritual for creating one, as per Gargoyles, was placing a scroll with holy writings penned on it, such as the name of God, inside its mouth. The word golem is Hebrew for "lump of clay"; it was held that Adam himself was a "golem" before God breathed life into him after forming him from the dust of the earth. One of the best-known golems was the one created by Rabbi Elijah of Chelm. Another was the Golem of Prague covered in the animated series; it was created by Rabbi Loew to protect the Jewish community of Prague, but later on de-activated, after it became uncontrollable and began to endanger the community. According to the legends, the Golem's remains now lie in a secret attic of a synagogue in Prague, waiting to be re-awakened when the time is right.