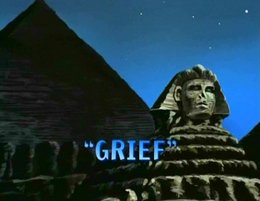 "Grief" is the forty-fourth televised episode of the series Gargoyles, and the thirty-first episode of Season 2. It originally aired on December 28, 1995.

Goliath, Elisa, Angela, and Bronx stumble upon the Emir's plot to capture Anubis to bring back his son in Egypt, and are captured. Jackal, who is there with what remains of the Pack, has his own agenda, and intercepts the Emir and becomes an avatar of Anubis. He destroys an Egyptian city, and ages the four travelers, but Goliath helps to convince the Emir to use the Scroll of Thoth and become the avatar instead. The Emir is able to stop Jackal and return things to normal before sealing off the underground chamber of the Sphinx so that no one could ever get access to Anubis again.

Xanatos sends Coyote 3.0, Wolf, Jackal, and Hyena along with the Emir to Egypt as part of another plot to try to gain immortality. Obviously, Xanatos had been searching for a way to become immortal since at least "The Edge", when the Emir was first mentioned, but probably much longer.

The gargoyle aging rate (half that of the human rate) is established.

The Pack is split up after this episode.

With Coyote's literal half-robot head destroyed by Goliath in "Upgrade", this trademark feature of the robot now becomes a video image (which would also be incorporated with Coyote 4.0 in "Cloud Fathers" and with Coyote 5.0 in "The Rock").

The Emir is introduced, having been mentioned previously in "The Edge" and "Double Jeopardy".

Anubis is introduced. He will appear among other Children of Oberon, in cameo, in "The Gathering Part One".

Michael Reaves introduced a few elements into the script for "Grief" rejected from a story that he had written for Batman the Animated Series entitled "Avatar" (such as the tanna leaves burned as part of the ritual to summon Anubis, and the mentions of such other Egyptian gods as Osiris, Isis, Set, and Thoth), which also involved the uncovering of a being of almost godlike powers over life and death native to ancient Egypt.

Greg Weisman regards this episode as one of his biggest missed opportunities. [1] During the episode, he had the Emir state that, while Anubis was being held prisoner, nobody on Earth could die. Unfortunately, he then failed to do anything with the idea. After making the episode, he realized that he ought to have used it, by proceeding to have the Pack "kill" Goliath and his companions, only to discover that, because of Anubis' captivity, none of them could die. [2] Since then, Greg Weisman has often spoken of his regret of overlooking this bet. [3][4][5]

Animation nit: Elisa's jacket is missing from one of the scenes near the end (as the protagonists stand in front of the Emir-as-Anubis'-avatar, in a grand sweep past).

Wolf's grumbling at the beginning of the episode about having to serve as "slave labor" seems almost prophetic now, in light of the name of the company that brought out the comic book - though obviously nobody on the production team could have possibly foreseen that!

Tanna is a fictional plant, created for the 1940 film The Mummy's Hand and its many sequels. In the movie, tanna leaves are important for the survival of the undead mummy Kharis, and are used for in various ways to control the mummy. Tanna leaves (sometimes spelled tana) have been used in mummy stories ever since. The name was invented by Griffin Jay, one of the writers of The Mummy's Hand, who initially intended to call them tanya leaves, after his wife. [6]