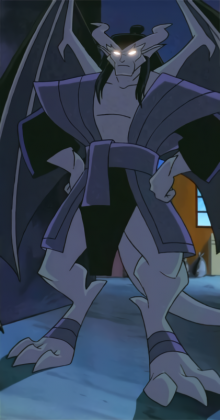 Kai is the leader of the Ishimura Clan of gargoyles.

Kai was hatched in 1898 with his rookery brothers and sisters in Ishimura, Japan. [1] Kai grew up being taught Bushido by his elders and the humans of Ishimura. He also became fluent in English, as well as Japanese. [2] At some point before 1996, he was made leader of the clan. He made Yama his second-in-command. [3] In 1996 he and the clan were betrayed by Yama and Taro when the clan was moved during their stone sleep to a "Gargoyle Theme Park" built by Taro with the intent of revealing the clan (and the gargoyle species) to the world. Fortunately, Kai and the clan were able to escape the domed structure before the press arrived. ("Bushido")

After the incident, the clan banished Yama and it is likely that Kai appointed Sora as his new second-in-command. ("The Lost") [4]

Despite his age, Kai is still a strong warrior. Like most his clan, he has black hair and two sets of horns. His brow horns are very similar to Goliath's and he has a larger set of horns behind those. He has greenish skin and wing coloration. His more unusual features are the spikes on each cheek and wrists and his tail which ends in a pointed blade. His wings are unique in that they have typical gargoyle wing ribbing, but also sport three small "fingers", giving him more digits on his wings than any gargoyle seen elsewhere so far.