Difference between revisions of "Marvel Comics" 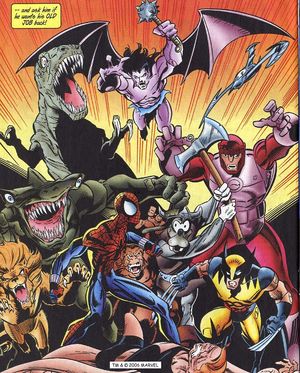 Marvel Comics is an American publishing company most famous for publishing comic books set in the so-called Marvel Universe, and featuring superhero characters like Spider-Man and the X-Men. Marvel has also published other books based off licensed properties such as The Wizard of Oz, Star Trek, Star Wars, Beauty and the Beast, Darkwing Duck and Aladdin.

In 2009, Walt Disney Pictures acquired the company as a subsidiary. How this might affect the potential of further Gargoyles comics in the future is unknown for now. [1]

In 1995, Marvel published an eleven-issue comic book series, Gargoyles, based on the TV series of the same name. Though the stories published aren't considered canon by series creator Greg Weisman, he did plan a story for a later issue which was published eventually as "Reunion".

The Amazing Spider-Man is the flagship Spider-Man comic book, that was initially written by Stan Lee and drawn by Steve Ditko, and has been published almost continuously for seven-hundred issues. In issue #413 "Bug Story", written in 1996 by Tom DeFalco and drawn by Mark Bagley (in a story taking place during Ben Reilly's tenure as Spider-Man), Mysterio traps Spider-Man in a child's bedroom at the size of an action figure. One of the toys that attacks him is Goliath.

Two television series have also made references to Gargoyles: X-Men: Evolution and The Spectacular Spider-Man.

X-Men: Evolution is an animated series that ran for four seasons between 2000 and 2003. In this series, featuring the superhero team known as the X-Men, several of the principal characters (good and bad) are re-imagined as teenagers in high school. Gargoyles crew member Frank Paur directed several episodes of the series.

In the episode "No Good Deed", during a montage of faked heroics by the Brotherhood, Avalanche knocks a stone statue resembling Broadway off a building so that Blob can catch it.

The Spectacular Spider-Man is an animated series featuring the character of Spider-Man, in his earliest days as a high school student still learning to cope with his powers and his responsibilities. Greg Weisman was the producer and story editor of the series.

For the Gathering of the Gargoyles convention of 2009, Weisman produced a radio play script titled "Religious Studies 101: A Handful of Thorns" which is a non-canonical crossover between The Spectacular Spider-Man and Gargoyles. "Recruits" another radio play script was written crossing over the two properties again for CONvergence in 2014. This story also included the cast of DC Comics Young Justice, as well as a brief appearance by Tony Stark/Iron Man who is also from Marvel Comics.

References to Marvel Comics from Gargoyles

Broadway's trenchcoat and hat disguise is a tribute to Ben Grimm/The Thing of the Fantastic Four on how he would disguise himself in public. Also, the way Broadway knocks out Dracon by flicking his fingers is also classic Thing. [2]

Among other things, Thailog's color differences were inspired by the Fantastic Four's uniform changing colors due to their travels into the Negative Zone. [3]

"Mark of the Panther"

"Eye of the Storm"

Despite trying to avoid it, Odin's designs were slightly inspired by Jack Kirby's design for the character in The Mighty Thor. [5]

The residents of New Olympus were influenced by The Eternals, The Inhumans and DC Comic's New Gods. [6]

When discussing the designs for the Tazmanian Tiger, Greg discussed that his initials on the costume were similar to Daredevil's initials interlocking. [8]

The building that Brooklyn finds the Phoenix Gate on is the Daily Bugle.

The supervillain known as Ultron was an inspiration for Coyote in regards to him being rebuilt with the number model being included in his name. [9]

In earlier developments of the series, David Xanatos was named Xavier. The name was changed because of similarities to Professor Charles Xavier (Professor X) from X-Men. [10]