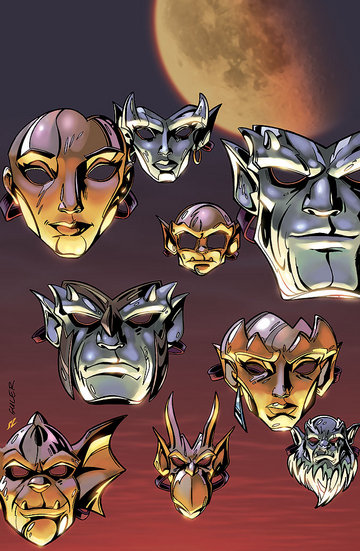 This is another good issue for cameos: we see Billy and Susan from "The Thrill of the Hunt", their mother (who's nervously eyeing a couple of Quarrymen - is she having second thoughts about the organization?), Jeffrey Robbins, Gilly, Brendan Quarters, Margot Yale, Officer Morgan, and Judge Roebling from "Vows".

Broadway and Angela attend the masquerade party as the Cowardly Lion and Dorothy from The Wizard of Oz (Angela even has a little stuffed Toto in her basket). Officer Morgan comes as Sherlock Holmes, and Elisa continues her habit (begun in "Eye of the Beholder") of going as a Disney princess by dressing up as Jasmine from Aladdin. (This probably has nothing to do with the comments by several Gargoyles fans that she looked eerily like Jasmine in the animation for the The Goliath Chronicles episode "Seeing Isn't Believing".) Lexington's costume is the most intriguing, however: he goes as his cybernetic self from "Future Tense", presumably without being aware of the significance of it. (It's probably just as well that neither Goliath nor Owen notices that.)