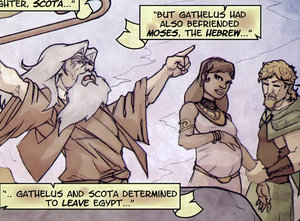 Moses warns Gathelus and Scota of the plagues

According to Shari, Moses had befriended Gathelus and Scota and had warned them of the plagues that would befall the kingdom of Egypt. When Gathelus and Scota left Egypt, Moses entrusted them with Jacob's Pillow, the Hebrews' sacred stone. ("The Rock")

An alternate version of the Stone of Destiny's history claims that Moses took the Stone with him when he led the Hebrews out of Egypt, and that it was the very stone he struck to supply them with water when they became thirsty. ("Rock & Roll") It is as yet unknown which of these two accounts actually occured, if either.