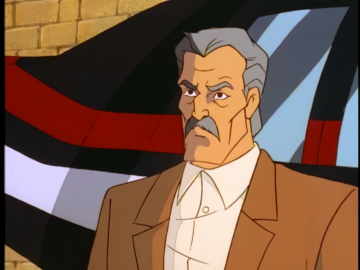 Petros, a Greek immigrant and naturalized American Citizen, is a poor fisherman in Bar Harbor, Maine. [1] He is a widower, and a Greek Orthodox. [2][3] He is a man of strong integrity, who disapproves of his son's amoral, machiavellian ways, and wishes that David had stayed at home and lived the life of a poor fisherman like himself. But he also possesses a sense of family loyalty, and will stick by his son when David needs his help.

Petros visited his son at Castle Wyvern in 1995, flown in from Maine to attend David Xanatos and Fox's wedding, and even accompanied him in his time travel adventure to 975, where he learned the origins of his son's wealth. The following year, he came to New York again for Alex's birth, and fought alongside David to prevent Oberon's attempt at kidnapping the child. In the battle, he shot Oberon with an iron-tipped harpoon; Oberon retaliated by hurling an unconscious Brooklyn and Angela into him, knocking him out. ("Vows", "The Gathering Part One", "The Gathering Part Two")

While Petros was the character's original name, in an early script it had been changed to "Stefan." [4][5] At the recording session though, Marina Sirtis pointed out that "Stefan" probably wasn't a Greek name, giving Greg Weisman a chance to return to his original choice. [6] Besides sounding more Greek, "Petros" also connected David's father to Peter Maza, father of protagonist Elisa Maza (a coincidence Greg only later realized). [7]

Before the episode "Vows" was aired, Petros Xanatos appeared in "The Pack Attacks", issue #7 of the non-canonical Marvel Comics comic book series.