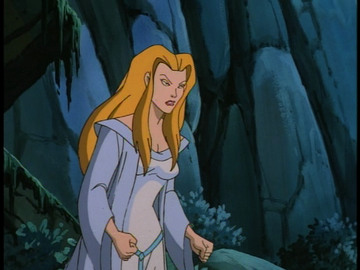 Phoebe is the Weird Sister of Grace.

She can be distinguished from the others by her blond hair. She is supposedly more gentle and kindly than Luna and Seline (although she was just as eager for the destruction of the Avalon Clan as were the other two).

When Phoebe is ascendant, the Sisters are the Graces. [1]

Phoebe's name comes from Greek mythology, where she was a Titaness, the mother of Leto and Asteria and the grandmother of Apollo, Artemis and Hecate. Her name means "the shining one." Later on, particularly in Elizabethan poetry, she came to be associated with the moon.

For the Graces, see the article on the Weird Sisters.