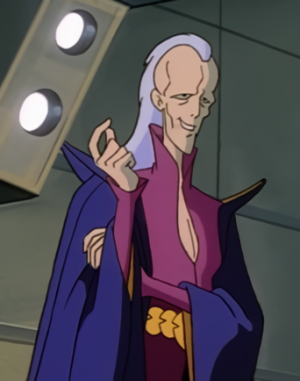 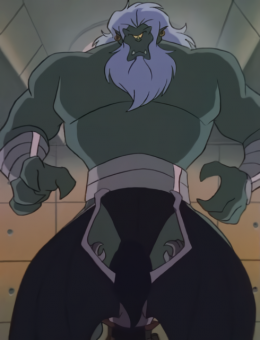 Proteus as a giant cyclops.

Proteus is a New Olympian, and shape-shifting psychopath. He is named after and is likely a descendant of the legendary member of the Third Race. [1]

Proteus has attempted many times to wreak havoc on New Olympus and escape into the outside world, presumably to create more trouble there for his own amusement. During his (at this time of writing) penultimate attempt to escape New Olympus, he murdered Minotaur, who was then Chief of Security. Afterwards, he was locked up in a force field cell in New Olympus's prison.

Proteus is a shape-shifter, who can mimic any living thing, even distinct individuals, such as Goliath, Elisa, and Taurus. His shape-shifting presumably does not give him the full nature of what he masquerades as, however, for when he took on the form of Goliath, he did not undergo stone sleep in the daytime. In addition, it doesn't give him any insight into the mannerisms and personality of those he poses as; he would actually have to get to know the target better as anyone else would.

Proteus escapes New Olympus and ends up in Manhattan to seek revenge on both Goliath and Elisa. He starts by posing as Goliath and prevents a theft in a dangerous manner. Afterwards, he poses as Elisa to trap and capture Goliath. He is eventually caught and defeated by Goliath, Elisa, Angela, and Hudson along with Taurus. ("Seeing Isn't Believing")