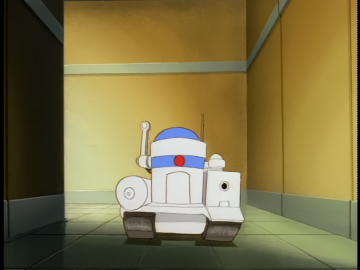 RECAP (short for Reconnaissance Emergency Cyber-Automated Probe) is a small, remote-controlled vehicle used to scout high-risk situations. By means of a virtual reality hookup, it could convey whatever it observed back to its operator.

RECAP was developed by the Scarab Corporation for the New York City Police Department. It was first tested (Matt Bluestone at the controls) when Coldstone invaded the Goldencup Bakery Building. Under Xanatos' instructions, it came into contact with the cybernetic gargoyle, connecting itself to him via taser long enough for it to download the virus that had infected him. After RECAP was seriously damaged by Coldstone in return, the Scarab Corporation recovered its remains and presented them to Xanatos, including the downloaded virus. ("Legion")