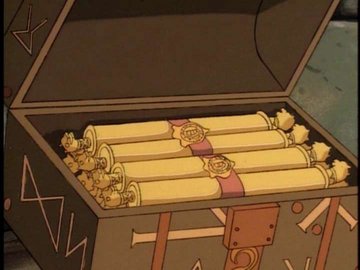 The Scrolls of Merlin

Scrolls of Merlin were two scrolls containing Merlin's memoirs, in which he recorded his life-story, including (at the least) such events as his training the young King Arthur Pendragon. [1]

Merlin stored the Scrolls in a cave of his in Wales, where they were found in 1995 by Lydia Duane and Arthur Morwood-Smyth. [2] Duane brought them to New York City for studying at the Metropolitan Museum of Art, but Macbeth ambushed her and seized the Scrolls, believing them to contain Merlin's spells (and presumably intending to use them against Demona). Macbeth was disappointed to discover the true nature of the Scrolls upon reading them, but the gargoyles, who had gone to recover them, recognized correctly their true worth, particularly Hudson and Broadway (who had learned the value of being able to read in the course of the adventure). Macbeth yielded the Scrolls to them, which they returned through Elisa to Duane. ("A Lighthouse in the Sea of Time")

It is hinted that the Scrolls contain a written account of whatever role gargoyles had during the reign of King Arthur. [3]