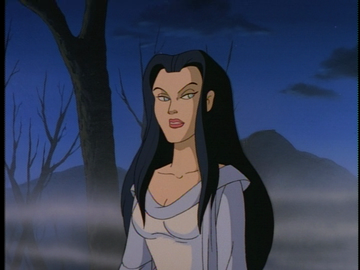 Seline is the Weird Sister of Vengeance, or Fury.

She can be distinguished from the others by her black hair. Seline is the most severe of the three; she was the one who told Macbeth that Gillecomgain had murdered Findlaech at Duncan’s orders, and gave him the magical ball of light that he used to slay Duncan in battle. ("City of Stone Part Three")

When Seline is ascendant, the Sisters are the Furies. [1]

Selene was the original goddess of the moon in Greek mythology (Artemis only filled that function very late in the development of classical mythology), the sister of Helios the sun-god (not to be confused with Helios the New Olympian). She was particularly noted for her romance with Endymion, whom she placed in an enchanted, unaging sleep, so that he could be her lover forever.

For the Furies, see the article on the Weird Sisters.