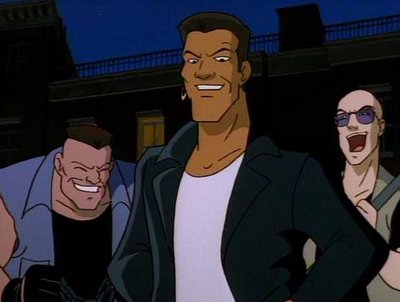 The street thugs are three New York human criminals who have encountered the Manhattan Clan gargoyles on several occasions. They have always been seen working together, usually committing muggings and other acts of theft.

The street thugs had their first encounter with a gargoyle when they attempted to mug Margot Yale and Brendan Quarters in October, 1994 after the couple's car broke down. On this occasion, they were scared away by Goliath. They later harassed Tom the Guardian when he came to New York in search of Goliath, but Tom soundly defeated them and referred to their leader as "all noise." ("Awakening Part Three", "Avalon Part One")

Some time after this, the group accosted a young woman in a subway station (in fact it was an undercover Elisa Maza), and later held up a subway train whose passengers included Margot and Brendan. By this point they had each acquired particle-beam weapons (probably part of the shipment stolen from Xanatos Enterprises by Tony Dracon). The thugs were quickly bested by Goliath, with some help from Elisa, Angela, and the Trio, although one of them managed to injure Brooklyn's arm. When the train next stopped, some police officers including Matt Bluestone and Officer Morgan were waiting, presumably to arrest them. ("Hunter's Moon Part One")

A different group of street thugs from London appears in "M.I.A.".