The Wizard of Oz 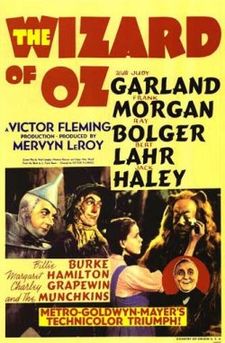 The Wizard of Oz is a classic 1939 film that has been referenced in Gargoyles several times.

Elisa paraphrased a line from the film when she said "I don't think we're in Scotland or Kansas either." Later, the Banshee told Cu Chullain that she'll get him and his little dog too.

"The Gathering Part One"

After arriving back in Manhattan, Elisa declared to Goliath that there's no place like home.

Angela and Broadway dressed up as Dorothy and the Cowardly Lion, respectively, for Halloween. Margot assumed that Lexington was dressed as a "post-modern Tin Man", but he claimed he was a cyborg.

A couple of people in the parade following Halloween are dressed as Dorothy and the Scarecrow. ("All Hallows' Eve")

The Wizard of Oz is also referenced in the non-canonical Gargoyles/The Spectacular Spider-Man crossover "Religious Studies 101: A Handful of Thorns". [1]

Early in the development of Gargoyles, there was going to be a villain called "The Sorceror/Sidero" who was described as manifesting himself in a Wizard of Oz state as a big floating head. [2][3][4]

Greg Weisman is a fan of the film [5] and has implied the Banshee is too.[6]