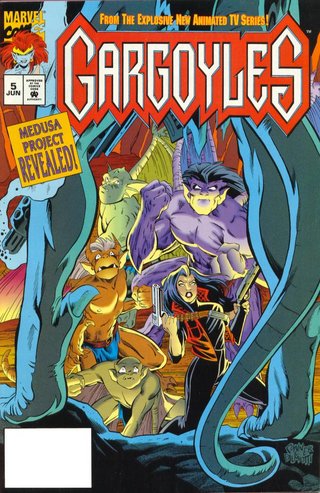 "Venus In Stone" is the fifth issue of the non-canonical Gargoyles comic book published by Marvel Comics. It was released in June, 1995.

Having learned about Gen-U-Tech Island from Glasses in the previous issue, Elisa and the gargoyles decide to go there in the hopes of putting an end to Xanatos' experiments. They arrive just as a conflict breaks out between Xanatos, Dr. Phobos, and Demona. Xanatos reveals the project he's been having Dr. Phobos work on: The Medusa Device, a weapon which can turn living beings to stone. As the gargoyles battle with him, Dr. Phobos brings Venus to life: a gargoyle he genetically engineered using Goliath and Elisa's DNA in the hopes of using her to destroy the gargoyles.

It is revealed that the reason Demona deliberately lured Goliath and Elisa to Xanatos' laboratory in the first issue was because Xanatos wanted Goliath's DNA. This enabled Dr. Phobos to develop the technology to turn living beings to stone, and he also secretly merged Goliath's DNA with Elisa's to create Venus, a gargoyle who resembles Elisa Maza.

Demona reveals she also knows about Venus, as well as the code for getting into the chamber in which Venus was being incubated - both of which Dr. Phobos believed were secret.

The conflict between Xanatos and Demona begins when she demands the Medusa Device from him, with Dr. Phobos caught in the middle.

Beth goes back to school in Arizona, having had her share of excitement in the city. In her private thoughts, Elisa confesses to feeling guilty about lying to her about the "monsters" she saw.

As in previous issues, this issue deals with the gargoyles' inability to glide in the absence of wind currents. Elisa gets a boat from a drug bust to travel to Gen-U-Tech Island, but doesn't want to get too close for fear of being spotted. When they find some jet skis on the boat, the gargoyles improvise by using their wings to go parasailing until they can gain sufficient lift to stay in the air.

Demona's desire to use the Medusa Device is consistent with her behavior in the canon "City of Stone" four-parter, in which she deliberately turned human beings to stone in order to destroy them at night. However, Xanatos' desire to turn the gargoyles (or anyone else) to stone has never been seen in any canon material.

Xanatos' Vertical Take Off and Landing Gear is shown in this issue. It was only briefly mentioned in the canon episode "A Lighthouse in the Sea of Time", and has never been shown in any canon material.

Xanatos' exo-frame appears in this comic; however, it is colored gold instead of red, like in the canon material. Broadway recognizes it immediately, which indicates that this is probably the comic book adaptation of the exo-frame from the canon material, and not a new suit of armor.

This is the first issue in which Owen resembles his counterpart on the TV series. In previous issues, he had looked almost nothing like him.

Part of Broadway's motivation in wanting to stop Xanatos' experiments comes from what happened to LaVonne in the previous issue. Although Broadway is depicted as having a sensitive side in the canon material, this particular side of his is never shown.

The idea of combining gargoyle and human DNA would be used later in "The Reckoning" when Thailog obtained Elisa and Demona's DNA so Sevarius could create Delilah.