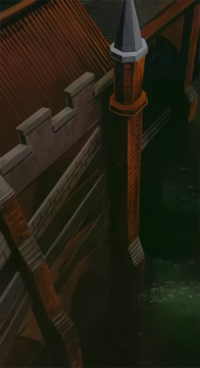 Westminster Abbey is one of the most famous churches of London.

Originally built by Edward the Confessor, Westminster Abbey was consecrated in 1065. [1]

On December 25th, 1950 Macbeth and four other Scotsmen broke into the Abbey to retrieve the Stone of Destiny. It was returned to the Abbey the following year. ("The Rock") [2]

In May 1996, King Arthur Pendragon came to Westminster Abbey upon his arrival in London, originally for the purpose of standing vigil there. However, Griff saw him enter and went to investigate, leading to their meeting. Arthur then encountered the Stone of Destiny, who told him that he must prove himself worthy once again to wield Excalibur. After Arthur recited the Excalibur Poem that was taught to Griff as a hatchling, the stone transported him and Griff to New York City to quest for the magic sword there. ("Pendragon")

Later that year, Macbeth, Hudson, and Lexington came to London to ensure the safe transport of the Stone of Destiny from the Abbey to Scotland. King Arthur, Griff and two other members of the London Clan (Staghart and Constance) also arrived on the scene. The five gargoyles were later attacked there by Coldsteel, Coyote 5.0, and Steel Clan and Iron Clan robots. ("The Rock", "Rock & Roll")

Westminster Abbey was originally built by Edward the Confessor (1042-1066), who was King of England during Canmore's overthrow of Macbeth; it was later on rebuilt by Henry III (1216-1272), producing the present-day building. Westminster Abbey serves as the traditional place of coronation for the King or Queen of England or Great Britain, having served this role ever since 1066. It is also the place of burial for many noteworthy English figures, including a number of past monarchs. Between 1296 and 1996, the Stone of Destiny was kept here, beneath the Coronation Chair.