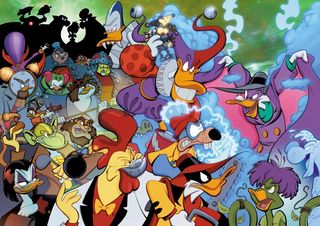 Darkwing Duck was a cartoon series starring Drake Mallard as the masked hero, Darkwing Duck. It aired on the Disney Afternoon from 1991 to 1995. The series was produced by Tad Stones.

Greg Weisman helped Tad Stones to develop the series, staff up the writing team, and gave story notes on episodes. [1] He came up with the name Gosalyn. [2]

The series was a comedic take on pulp heroes such as the Shadow, and comic book characters such as Batman, as well as everything in between.

The series was revived as a comic book, published by Boom! Studios in June, 2010. Before the Boom Comics revival, Darkwing Duck comics were published in both Disney Adventures and the short-lived Disney Afternoon comic book licensed to Marvel Comics.

The first 16 issues were reprinted for a second time by Joe Books Ltd. and released in the trade paperback Darkwing Duck: The Definitely Dangerous Edition in February 2015, with a foreword written by Weisman. In 2016, Joe Books also continued the comic book where the first sixteen issues left off.

The following Gargoyles cast members appeared in Darkwing Duck. They are listed in alphabetical order.

References to Darkwing Duck in Gargoyles

Among other things, one of the influences for Thailog was Darkwing Duck's enemy, Negaduck. [3][4]

References to Gargoyles in Darkwing Duck 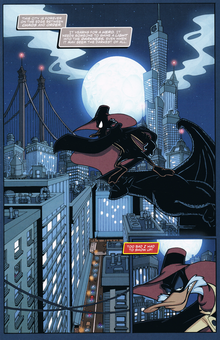