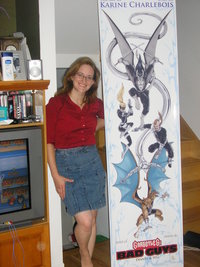 Karine Charlebois got her start as a Gargoyles fan artist, and quickly became well-known in the fandom for her amazing skill, as well as her positive and kind personality. She has since gone on to become an accomplished storyboard artist, lead singer in a band, dedicated wife and mother of two, and former staff for several Gatherings, including Gathering Convention Chair in 2004. Karine has now bridged the gap from Gargoyles fan to a Gargoyles Pro! She was the penciller for the fifth issue of Gargoyles, "Bash", and the main penciller on the Gargoyles: Bad Guys mini-series.

Karine lives in Montreal, Canada with her husband, Adam, and her two sons, Matthieu and Samuel.