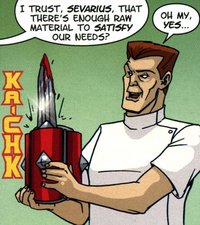 Thailog's Forearm Guards are a pair of large pieces of armor worn by Thailog when he invaded the Eyrie Building on Halloween 1996. Each one contains four blades that can be released and retracted by an unknown mechanism. These blades are formidable weapons, akin to short swords. Although only one blade on each wrist can be used at a time, the guards can rotate to bring each blade into play by turns.

Thailog used these weapons to collect DNA samples from each member of the Manhattan Clan to give to Anton Sevarius. The eight blades were each used to collect the DNA of a different member of the clan. ("Masque", "Bash")