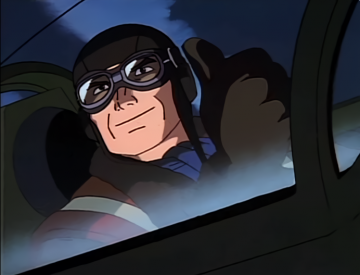 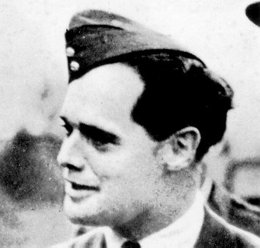 A photograph of the real Douglas Bader.

Douglas Bader was a flier in the Royal Air Force who took part in the defense of London during the Battle of Britain despite the fact that he was missing both his legs from an earlier accident. He recognized Goliath and Griff as allies to the British forces in the fighting. ("M.I.A.")

Douglas Bader (full name: Sir Douglas Robert Stuart Bader) was an actual historical figure (1910-82) who fought in the Second World War before being captured by the Germans in France in 1941. He lost both of his legs in a flying accident in 1931 but had them replaced with artificial limbs made of tin; in World War II, he fought effectively against the Germans in the air war with 22 kills, before his capture. Even after his capture, he made four attempts to escape before the Germans began taking his artificial legs away from him at night; he was finally freed from the POW camp where he was being held by the American Third Army. [1]

As a boy, Greg Weisman met Sir Douglas - and even went to Disneyland with him. [2] Greg has described him as "nice and funny and tough as nails." [3] Sir Douglas was a personal hero of Greg's father Wally Weisman. [4] These personal associations inspired Sir Douglas' inclusion in "M.I.A."