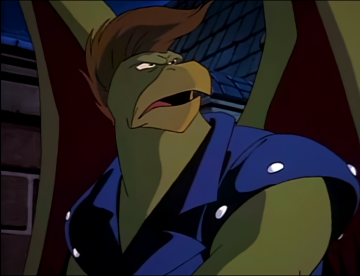 Sir Griff is a gargoyle of the London Clan and later a knight in King Arthur's service.

Griff was hatched in 1898 in the rookery of Knight's Spur alongside Leo and Una and other rookery siblings. [1] As a hatchling, his elders taught him the Excalibur Poem that would later prove crucial in his quest for the sword. ("Pendragon")

At the time that World War II began, he was one of the shopkeepers of Into the Mystic in the city of London, alongside Leo and Una. He and Una were courting at the time. When the Battle of Britain began, Griff believed it to be his duty to help protect London from the Nazis, and therefore decided to participate in the aerial battle alongside the Royal Air Force against the Luftwaffe. Leo and Una, fearing that he would be killed, tried to dissuade him from it, but to no avail.

When Goliath arrived in 1940 via the Phoenix Gate, he joined Griff in the defense of London, hoping to prevent Griff's mysterious disappearance during the Battle of Britain which he had already learned of from Leo and Una in 1996. After all of his efforts to safely return Griff to Into the Mystic failed, he realized that he could not change history and so used the Phoenix Gate to transport both of them to 1996. There, Griff was reunited with Leo and Una, and took up protecting London again, this time with their help. ("M.I.A.")

Though Griff's return to his Clan seemed to change much for them, Griff didn't feel entirely comfortable there. It was not his time and his rookery siblings were now fifty-six years older than he was (nearly old enough to be his own parents). What was worse, Una had chosen Griff's brother Leo as her mate, making it impossible for Griff to rekindle the relationship he and Una had in 1940. [2]

Some time later, when King Arthur arrived in London, Griff spotted him breaking into Westminster Abbey and, mistaking him for a burglar, went down to investigate. There he discovered Arthur's true identity, and told him the Excalibur Poem. Arthur used this Poem to tell the Stone of Destiny where to transport him in his search for Excalibur. The Stone ended up transporting them both to the roof of the Guggenheim Museum in New York. Griff and King Arthur joined forces with Hudson and the Trio in the quest for the magical sword, battling against Arthur's rival Macbeth, a water creature summoned or created by the Lady of the Lake, Macbeth's henchmen Fleance and Banquo, and finally an animated stone dragon which guarded the sword, before Arthur finally regained Excalibur. When Arthur afterwards declared his intention of setting out on a fresh quest to find Merlin, Griff decided that he would rather stay with Arthur than go back to London where he still felt uncomfortable. [3] Arthur accepted his offer and dubbed him a knight. The next night, Sir Griff left New York with Arthur. ("Pendragon")

King Arthur and Sir Griff searched for Merlin in all the obvious places without success and eventually returned to London (with Macbeth's help) to rest and research. [4]

In November 1996, Arthur and Griff, with two other members of the London Clan (Constance and Staghart), encountered Macbeth, Lexington and Hudson again, who had arrived to safeguard the Stone of Destiny which was being moved from Westminster Abbey back to Scotland. ("The Rock") Griff introduced Macbeth and the two Manhattan gargoyles to his clanmates and welcomed them to Knight's Spur. Griff and the group of gargoyles were later attacked by Coldsteel, Coyote 5.0, and Steel Clan and Iron Clan robots while standing vigil over the Stone of Destiny. Griff severely damaged the Iron Clan robot with his Lightning Gun. After the end of the Stone of Destiny adventure, Griff suggested to Lexington and Hudson that they remain in London for a time to get to know the London Clan, which they did. ("Rock & Roll", "Rock of Ages")

In the Pendragon spin-off, Sir Griff and King Arthur will eventually continue their quest to find Merlin. They will be joined by Blanchefleur. [5]

It seems very likely that Sir Griff will be one of the founders of the Camelot Clan in the time to come.

Griff bears a striking resemblance to a griffon; hence his name. He has yellowish skin, a hawk-like beak, feathered wings, and a lion-like tail. He is a particularly adventure-loving swashbuckler, coming close to the embodiment of traditional British heroism. His style of combat is apparently unique with his willingness to use ranged weapons, such as Macbeth's Lightning Gun.

"Griffin" was one of the earliest names considered for the protagonist who became Goliath when the series was first imagined as an action-drama with a tragic lead. [6]