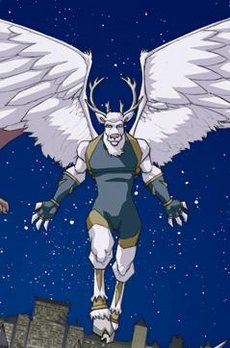 Staghart is a male gargoyle of the London Clan. He prefers to be known as Amp, although currently it seems only Lexington uses the name.

Staghart and his rookery siblings, including Constance, hatched at Knight's Spur in 1958. [1]

In late 1996, they accompanied King Arthur Pendragon and Sir Griff to Westminster Abbey in London to stand vigil over the Stone of Destiny, where they encountered and befriended Hudson and Lexington. While there, they were attacked by Coldsteel, Coyote 5.0, and Steel Clan and Iron Clan robots.

Staghart and Constance are best friends, but not mates. He and Lexington have grown to be fast friends. They each saved the other's life while being attacked by Coyote 5.0 and worked well together in destroying the Steel and Iron Clan robots. After this adventure, Staghart urged Lexington and Hudson to remain in London with his clan for a time. ("Rock & Roll", "Rock of Ages")

Staghart strongly resembles a white bipedal stag with white feathered wings and cleft hooves as his feet. He has a very short tail. Despite Staghart's majestic appearance, he seems to be more of a fun-loving, adventurous (even somewhat nerdy) sort. He prefers the nickname "Amp" although, according to Constance, few people use the name.

When asked whether he and Constance are mates, Staghart denied it vigorously, but with the equally firm assertion of her being a dear friend.

The name Staghart is derived from the words "stag" and "hart", both of which are terms for an adult male deer, particularly the Red Deer species which is native to Europe and parts of Great Britain.

Staghart is designed to look like a white stag, perhaps as an allusion to the role that white stags and harts played in Arthurian romance and other medieval legends.

In the original Gargoyles comedy development, Amp was the name given to Brooklyn's character, though he looked more like Lexington at the time.