The Trio and Bronx in the Wyvern Rookery

A rookery is a protected area where gargoyle clans keep their eggs until they hatch. In a broader sense, gargoyles use the term 'rookery' to refer to their entire home and protectorate, not just the place where the eggs are placed. [1] 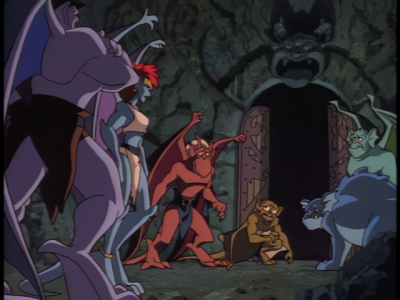 An Entrance to the Wyvern Rookery

The rookery of the Wyvern Clan was a cave inside Wyvern Hill with at least one entrance that led into Castle Wyvern's courtyard. There may have been more entrances. The rookery contained several "nests" (see picture to the right) that held the actual eggs. There was also faint illumination provided by a sort of mold growing on the walls and pillars of the cave; this implies that the rookery may have been quite damp. The rookery was very old, and Castle Wyvern had actually been built on top of it, as was often done in gargoyle/human alliances. By 1996, due to time and the removal of the Castle, the Wyvern rookery was little more than a rocky pit.

Rookeries Of Other Clans

Though no other rookeries have yet been seen, it is assumed that they too are generally underground in a natural cave of some sort. Knight's Spur, the Mayan Pyramid and the temple at Ishimura probably all have rookeries beneath them.

Gargoyle eggs hatch in the rookery every 20 years (those years ending in 18, 38, 58, 78, and 98). Each rookery generation is raised together by the clan. The closest biological relation between two gargoyles in a rookery generation is first cousins. Although none of the gargoyles are biological siblings, they view each other as rookery brothers and sisters. For instance, all the gargoyles hatched in the Wyvern rookery in 938 (including Goliath, Demona, Hyppolyta, Brooksbro, Othello, Desdemona, and Iago) are rookery siblings, though none of them are closely related. [2][3] The clan raises each generation together, unconcerned with and usually unaware of biological parentage.

Gargoyles tend to choose mates from among their rookery brothers or sisters, though this is not always the case (See Broadway and Angela or Yama and Sora). [4]

Among the Wyvern Clan at least, a common punishment for hatchlings that have caused trouble is to be sent to the rookery. The Trio was particularly embarrassed when they were sent to the rookery by Goliath as young adults in 994, though this action ended up saving their lives. At the time, Broadway commented that he had not been in the rookery since he hatched, which suggests he was either being sarcastic, forgetful, or, most likely, had managed to stay out of trouble throughout his childhood. ("Awakening Part One")