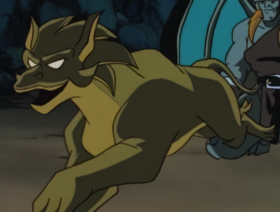 Boudicca is a gargoyle beast member of the Avalon Clan. 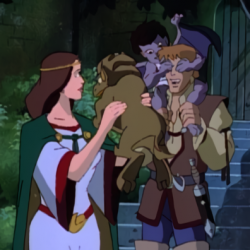 A young Angela and Boudicca with Princess Katharine and Tom.

Like the rest of the Avalon Clan, Boudicca was brought from the Wyvern Clan's rookery to Avalon by Princess Katharine, the Magus, and Tom while still in the egg in 995. ("Avalon" Part One) She hatched there in 1058, and was raised by the three humans. [1] She helped defend Avalon from the Archmage when he attacked in 1995, in consort with Bronx as well as with the Avalon gargoyles. ("Avalon Part Two", "Avalon Part Three") 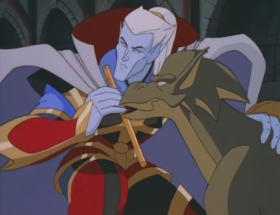 Later on, Oberon brought her with him to New York City to help search for Puck (with a spell making her look like a dog, to avoid attention), but wound up discovering Titania instead. Oberon returned Boudicca to Avalon afterwards. ("The Gathering Part One") [2]

Boudicca and Bronx are currently mates, if separated ones. [3][4] Boudicca is expected to lay an egg in 2008 [5][6] She and Bronx will have one hatchling that will stay on Avalon with its mother . . . for starters. [7]

Boudicca is slender and somewhat dog-shaped. Her skin is yellowish olive green with a dun-yellow belly. She has two bony projections on her cheeks, a long snout somewhat like a beak, and a long tail with a kind of fin on the end of it. On her head she also has a crest of six spikes behind her ears, which are long and pointed.

Note: This character does not speak, therefore she does not have any lines. 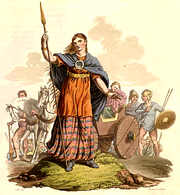 A painting of the historical Boudicca.

Boudicca was named after a queen of the Iceni (an ancient British tribe living in what is now Norfolk), more commonly but inaccurately known as Boadicea. (Recent historical evidence has suggested that the correct form of her name was actually "Boudica".) Boudicca was the wife of King Prasutagus of the Iceni; when he died in C.E. 60, he left part of his lands and wealth, but only part, to the Romans, who had by then conquered and annexed Britain. The Romans greedily decided to help themselves to more than their fair share, and when Boudicca protested this, they responded by flogging her and raping her daughters. In fury, Boudicca decided to seek revenge against Rome; she led the Iceni and many neighboring British tribes to war against Rome, sacking London, St. Albans, and Colchester and slaughtering everyone whom she could find in those three towns, Romans and Britons alike. At last, however, the Roman general Suetonius Paulinus defeated her in battle in C.E. 61, and Boudicca promptly poisoned herself in despair. A statue of her stands in London on the Embankment, to this day.

For a time, during the making of "Avalon" Part Two, Boudicca's name was Tribeca and she was to be named during the episode. [8]