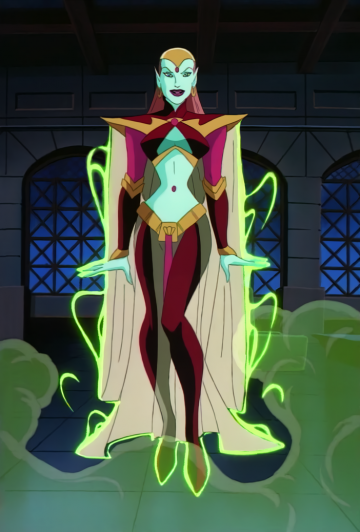 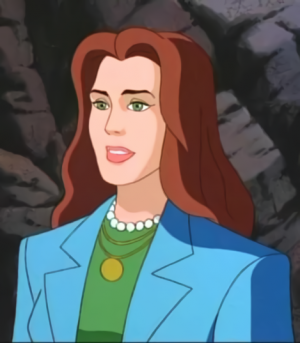 Titania is the wife of Oberon and queen of the Third Race. Her human alias is Anastasia Renard.

At some unknown point in time, Titania and Oberon were married and ruled over the Fair Folk together. In those days, however, Titania was vain and petty, and displayed considerable scorn towards mortals. At last, in 995, a specific action of hers (as yet unknown) served as the final catalyst in angering Oberon; he divorced her and banished both her and the rest of the Third Race from Avalon, to dwell in the outside world for the next thousand years, in the hopes that they might learn to respect the mortal races.

Titania's adventures during the greater part of this time period are unknown to us, but in the latter half of the 20th century, she began studying human science and technology, under the alias of "Anastasia" (last name unknown). During this time, she met Halcyon Renard, who was then a young man and had not yet fallen victim to the disease that is now killing him. She fell in love with him, and he with her; they were married not long afterwards, and apparently lived quite happily; by now, Titania had indeed learned the lesson that Oberon had wanted her to learn, to respect mortals. She gave birth to a daughter, Janine Renard, now Fox. But in the end, Renard proved too rigid and stiffly honorable to hold Titania's attention for long; they divorced. ("The Gathering Part One")

When Xanatos and Fox decided to create the Matrix, Fox sought the help of her mother to achieve this. She and Anastasia created the Matrix in a remote laboratory in Australia; Anastasia, however, was aware of the potential danger that the Matrix posed, and urged Fox to take proper precautions. In spite of her warnings, however, the Matrix indeed became self-aware, and threatened to reformat the entire planet; fortunately, Goliath and Dingo were able to prevent it from doing so. ("Walkabout")

In gratitude to Goliath for helping to stop the Matrix from overrunning the globe, she spoke up in turn for him when she accompanied Oberon back to Avalon to confront the Avalon Clan, encountering the gargoyles for the first time in her true form as Titania. When Oberon angrily sought to banish or destroy the Avalon gargoyles and their friends for "trespassing" on his island, she interceded on their behalf, persuading Oberon to settle their dispute by a duel with Goliath, Angela, and Gabriel, thus giving the mortals an opportunity to defend their home. She also subtly supplied the other members of the clan and Elisa with the clue to defeat Oberon by means of an iron bell. As an incentive to get Oberon to agree to the duel, she agreed to marry him again if he was victorious. Oberon defeated the three gargoyles, but was overwhelmed by the iron bell afterwards and finally agreed to let the Avalon clan stay; afterwards, he and Titania were remarried, perhaps because he had, technically, won the battle before the bell was brought into play (and he had shown humility when he was defeated) -- or perhaps because she simply wanted him back as a husband. ("Walkabout", "Ill Met By Moonlight")

Titania afterwards briefly returned to the human world to attend the birth of her grandson Alexander in New York City as Anastasia Renard. When Oberon discovered her at the Eyrie Building while he was searching for Puck, Titania persuaded him to carry Alex away to Avalon for her, announcing that she intended to take him to the magical island to be trained in his magical heritage. She had seen how Fox had never made any use of her halfling powers, despite the many crisis situations that she had been thrown into, and had regretfully concluded that Fox had permanently lost her magical potential, and she did not wish to see her grandson suffer the same fate. She also alerted Goliath and his clan to Oberon's intentions, ostensibly so that they could protect Fox and Alex during the ensuing battle between Oberon and Xanatos (although her real reason was more likely to have the gargoyles present at the battle on Xanatos' side for her purposes). Oberon defeated all the opposition thrown against him: Xanatos, the gargoyles, Renard, and even Puck, but after Fox in a last moment of desperation summoned up enough magic to strike at Oberon, Goliath used the opportunity to persuade Oberon and Titania to let Alex stay in the human world to be trained in magic. Titania agreed to this and to having Puck serve as Alex's tutor. When she saw that Fox was still angry about Titania's attempted abduction of Alex, she hinted that this outcome was what she had really intended all along, and whispered something in Fox's ear, as yet unknown to everybody except for Titania and Fox. After that, she and Oberon departed, although Titania has announced that she will be periodically "looking in" on her daughter and grandson. ("The Gathering Part One", "The Gathering Part Two")

Titania also has a son and a daughter by Oberon, although their names and natures are as yet unknown. [1] The events surrounding them are considered "not so happy." [2]

Titania was originally more haughty and arrogant towards mortals, but has since become more sympathetic towards them (although some might argue that her effort to kidnap Alex would indicate that she may have some ways to go as yet). She is also more subtle and ingenious than Oberon, an expert at accomplishing her ends through indirect methods.

Titania's regular "human alias" is Anastasia Renard. In her "true form," she looks like a beautiful "elven-featured" woman with pale green skin and red hair.

In the episode "...For It May Come True", Titania briefly gives an exasperated Goliath visions of a dream world where was now human (though he remembered his previous life as a gargoyle) and was married to Elisa Maza. When Titania finally revealed herself, she explained that her orchestration was to remind Goliath of the difference he already made in the lives of those around him, in particular both Xanatos and Elisa.

Unlike Oberon, who was a noteworthy figure in "faerie lore" before A Midsummer Night's Dream, Titania seems to have been entirely Shakespeare's invention. At least, no mention of her is found as a queen of the faerie-folk prior to his play. It is thought that her name is taken from an old Roman name for the goddess of the moon, in her function as a female Titan.

In Shakespeare's play, Titania and Oberon are portrayed as engaged in a bitter quarrel over the custody of a young Indian princeling, whom Titania currently keeps but whom Oberon wishes to have in his following.

To win his quarrel, Oberon temporarily enchants Titania to make her temporarily fall in love with Nick Bottom the weaver (whom Puck has given a donkey's head to), and persuades her during this time to let him have the child; she, distracted by Bottom, agrees. By the end of the play, Oberon and Titania have reconciled, and even bestow their blessings upon the triple wedding of Theseus and Hippolyta, Hermia and Lysander, and Helena and Demetrius.

Titania was ignored by Shakespeare's contemporaries in favor of Mab as the Fairy Queen, but more recent writers have consistently recognized her in this role and that of Oberon's consort, including, of course, the production staff of Gargoyles.