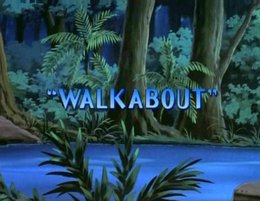 "Walkabout" is the forty-sixth televised episode of the series Gargoyles, and the thirty-third episode of Season 2. It originally aired on February 7, 1996.

Fox and Anastasia Renard create the Matrix using nanotechnology and test it in the Australian outback. The Avalon World Tour travellers join forces with Dingo at the test site after the Matrix gets out of control. The Matrix has evolved beyond its original programming and threatens to cover the Earth with microscopic machines. Goliath and Dingo confront it in the Dreamtime, and Dingo convinces it to pursue law and order.

Fox's pregnancy is progressing, and her child is revealed to be male.

Dingo expresses his desire to reform and become a hero like he was on The Pack. He and Matrix join forces to become a crime-fighting team and will later join the Redemption Squad.

Fox and Dingo both appear for the first time since "Upgrade". They are both former members of the Pack, although this is Dingo's first episode working outside that group.

Fox is visibly pregnant, following the revelation of her pregnancy in "Outfoxed". She reveals that the child is a boy. She gives birth in "The Gathering" Part One.

Anastasia Renard is introduced. She was mentioned by Halcyon Renard in "Outfoxed". Anastasia will reappear in "The Gathering" Part One.

Matrix is introduced, and bonds to Dingo at the episode's end. Matrix and Dingo are protagonists of the SLG miniseries Gargoyles: Bad Guys, and appear in the first episode of that series, "Strangers".

The Shaman is introduced. He reappears in "Strangers".

As knowledgeable fans have pointed out, the script misused the term "Dreamtime" here, treating the Dreamtime as if it was another dimension. In fact, the Dreamtime of actual Australian Aborigine legend was a time, the time when the world was newly created and going through the processes that would shape it into its familiar form.