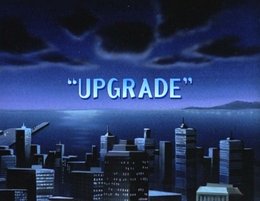 "Upgrade" is the thirtieth televised episode of the series Gargoyles, and the seventeenth episode of Season 2. It originally aired on November 9, 1995.

Coyote offers the Pack dramatic alterations to their bodies since they have become a pathetic group of fugitives. Jackal and Hyena become cyborgs, while Wolf is mutated into the image of his animal namesake. Through Coyote's instruction, the Pack lures Goliath, Hudson, Elisa and Bronx into a trap and holds them hostage. Thanks to a tip from Fox through a television commercial, Brooklyn leads the trio to the Pack's hideout and the gargoyles use teamwork to defeat them.

Dingo has become disheartened with his membership to the Pack. He's not happy that they have sunk to bank robbery. When offered an upgrade, he opts to dress in battle armor rather than mutilating his body like his teammates. Though he does aid the others in trying to kill the clan, he leaves the team afterward.

The gargoyles spot the Pack robbing a bank and go to intercept them. Goliath is injured in the struggle. Hudson urges Goliath to choose a Second in Command from the trio, but Goliath keeps his decision to himself for a month, fearing that the trio would end their friendship over it. After the three young gargoyles rescue him and the others, however, Goliath realizes that they will always remain a team, and so appoints Brooklyn as his Second in Command.

The trio are at odds with one another during the ensuing month before Goliath makes his choice. They begin engaging in nightly arguments and competitions. However, after Brooklyn proves himself by showing leadership qualities and his talent for tactics coming up with a plan to saves his clan mates, both Broadway and Lexington agree that Goliath made the correct choice.

In contrast to the gargoyles, the Pack chooses between Wolf and Coyote as their new leader, and Coyote wins by democratic vote.

Xanatos and Fox are playing a game of chess throughout the episode, revealing a much more dangerous game is going on. Xanatos had Coyote lead the Pack in going after the gargoyles, while Fox produced a commercial tipping the trio off to the location of the Pack's hideout. The whole setup is put together so that Xanatos and Fox could choose sides and entertain themselves by controlling people's lives.

"Please. It's all compliments of the hard working men and women of Xanatos Enterprises." - Jackal and Coyote

"I find him very attractive."
"Well that's sicker than usual!" - Jackal and Hyena

"If you were leader, I'd be somewhere else at all times." - Lexington and Broadway

"A sight better than trading in pieces of your own body like used car parts."
"What's your problem?"
"I'm a partner in a freak show." - Hyena and Dingo

"What I want to know is, where do we take them? A hospital, a machine shop, or a vet!" - Phil Travanti and Morgan

"But I have won, my darling. For in you, I have found a true equal. Care to play again?" - Fox and Xanatos

The Pack appears for the first time since "Leader of the Pack", and Lexington is still mad at them following "The Thrill of the Hunt". They next appear (sans Dingo) in "Grief".

The image of Talon during Coyote's "sales pitch" uses the character design that was introduced in "The Cage" (which hadn't taken place yet and first aired after "Upgrade"'s first airing) rather than the one from "Metamorphosis". There are also shots of Coldstone, Coyote 1.0 from "Leader of the Pack", and Xanatos in his gargoyle armor from "The Edge".

Officer Morgan is one of the police officers who show up at the end to arrest the Pack; he jokingly wonders whether they should be taken to "a hospital, a machine shop, or a vet".

At the end of the gargoyles' opening battle with the Pack, Wolf shouts just before fleeing, "This isn't over!" - the same words that Hakon shouted after being initially driven off by the gargoyles in "Awakening Part One". It isn't until "Vendettas", however, that we discover how significant this is.

In this episode, each member of the Pack receives a specific upgrade. Wolf is mutated into a werewolf-like form by Gen-U-Tech (in "Estranged", it is revealed that Sevarius handled the operation). Jackal and Hyena become cyborgs. Dingo starts wearing a suit of power armor.

Dingo appears as a member of the Pack for the last time, already shocked that the depths to which his teammates have fallen. He next appears in "Walkabout".

Brooklyn, because of his obvious talent for leadership and tactics, is officially appointed as Goliath's second-in-command. By his own admission he is in no hurry to take the top spot, foreshadowing the events of "Kingdom".

Hudson mentions the Archmage in passing, foreshadowing the events of "Avalon".

They cut the scene where Jackal's disembodied arm hangs limply from the wall after Brooklyn beans him with the wooden board. It cuts from Brooklyn swinging the board at the camera to him climbing out of the trench.

Also, the cut the scene where Coyote's body gets hit by the train. It goes from Goliath and Broadway pusing him onto the tracks, to the side view ofthe train zooming past.

What makes these edits interesting is that Jackal's arm was seen getting pulled off and reattached throughout the episode, and the scene where Goliath crushes Coyote's head is left apparently uncut which was surprising.