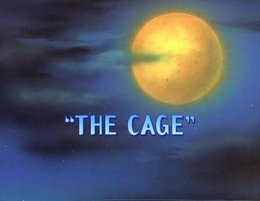 "The Cage" is the thirty-second televised episode of the series Gargoyles, and the nineteenth episode of Season 2. It originally aired on November 16, 1995.

Xanatos begins to lose control of the mutates who are living at the Eyrie Building with him when Talon finds out from Elisa, and later for himself, that Sevarius had faked his death. Goliath, out of fear that Talon would kill Sevarius before he could make a cure, but more concerned about Elisa's emotional turmoil over the whole ordeal, kidnaps Sevarius at Gen-U-Tech labs. Goliath brings Sevarius to the abandoned underground Cyberbiotics facility and threatens to hold him captive until he creates a cure for the mutates. Talon, under the false impression that Goliath and Sevarius are in cahoots, storms the lab with the other mutates, and comes close to killing Sevarius along with Goliath until Xanatos arrives just in time to save the geneticist. Talon finally learns the truth about Xanatos, and he and the other mutates stay in the facility and create the Labyrinth.

Elisa's family is worried about Derek, who's gone missing, and Elisa is unsure how to handle the situation. She learns from Goliath that the mutates have been residing with Xanatos, so she has Goliath take her to the Eyrie Building. Talon greets them with an attack, since he partially blames Goliath for his predicament since the gargoyle supposedly killed Sevarius, obliterating any chance for a cure. Xanatos succeeds for a while in keeping Talon in line by reinforcing that delusion.

Xanatos is under the impression that Talon has captured Sevarius and asks him to release the doctor. There's some confusion until Owen receives the surveillance footage of Goliath abducting Sevarius. Xanatos uses the footage to continue to manipulate Talon into believing that Goliath and Sevarius are working together. Owen deduces Goliath's location at the lab, and Talon races there, letting his anger overcome reason. Elisa sees the same surveillance tape at Gen-U-Tech and is shocked, but makes the same conclusion as to where Goliath is.

Maggie reluctantly leads Fang and Claw to the clock tower, and they take down Hudson and Bronx. Talon sent them there to confront Goliath, who was still at the Cyberbiotics lab. The tables are turned on the mutates when the trio arrive back from a concert. They immobilize Fang and Claw, while Brooklyn tries to convince Maggie of Xanatos' treachery, but Maggie is in denial because she believes Xanatos will cure her. Brooklyn gives up and releases the mutates.

Elisa arrives at the lab before the others, and talks Goliath into releasing Sevarius in the same moment that Sevarius has supposedly completed the antidote. Talon bursts in and overpowers Goliath while Sevarius uses the antidote as a bargaining chip for his life. Maggie wants the antidote, but Sevarius makes a suspicious comment that leads Elisa and Talon to believe that the "antidote" might actually be poison. Maggie tries to take the substance anyway, but Talon stops her, admitting that he can't get through his ordeal without her.

Goliath offers to let the mutates join the clan, citing that Elisa is already a part of it, but Talon politely declines. Elisa finally tells her family about what happened to Derek, and they see him for the first time since his transformation and accept him.

"Same song, same tune. Goliath has you snowed. He and Sevarius are both to blame, and he needs you to protect him from me!" - Elisa and Talon

"Sure he did. Guess I'll just have to clear my social calendar!" - Hudson and Fang

"Just get back to work, before conditions really do get primitive." - Sevarius and Goliath

"You were in so much pain, I couldn't stand by and do nothing!" - Elisa and Goliath

"I couldn't either, not without you. Maggie, we're not strong alone, we're strong together." - Maggie and Talon

"Elisa is already part of our clan. That makes you all...family."
"Thank you, Goliath. But it seems I have my own clan, and my own family." - Talon and Goliath

Vinnie appears as the Gen-U-Tech security guard (with the full consequences of his being the one on duty during Goliath's kidnapping of Sevarius surfacing in "Vendettas").

The Mutates appear for the first time since "Metamorphosis". In this episode they discover that Sevarius has survived (following his "death scene" in "Metamorphosis") and that Xanatos has been lying to them about searching for a cure. They move into the Labyrinth, forming the Labyrinth Clan. They next appear in "Kingdom".

Beth Maza appears on screen for the first time. She next apppears along with Peter Maza in "Cloud Fathers."

Talon, Maggie, and Fang assume new character designs here which the production team liked better than the "Metamorphosis" ones (the in-story justification used was that they hadn't finished mutating by the end of "Metamorphosis"). Talon's new design was briefly seen in "Upgrade" when Coyote was offering genetic engineering to the pack, which suggests that he was using footage from sometime after "Metamorphosis".

Maggie's nickname, "Maggie the Cat," is a reference to Tennessee Williams' Cat on a Hot Tin Roof.

Two flashback scenes were used from "Metamorphosis" to bring the story up to full length: Goliath's 'killing' Sevarius, and Maggie waking up to find herself at the clock tower.

When Goliath and Elisa arrive at the castle and Talon tells Fang and Claw to attack, Claw's fur color matches Fang's.

When Brooklyn lets the mutates go after the fight at the clock tower, Maggie and Claw are seen holding Talon rather than Fang before leaving.

Dr. Sevarius carries (and drops) a briefcase on which his name is misspelled "Servarius."