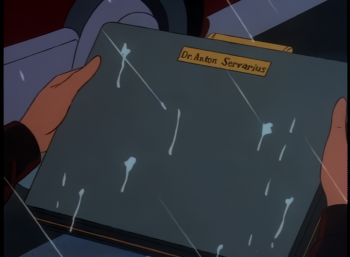 It's sort of like all those fans who typo her name as Eliza.

Sevarius’s briefcase was where Anton Sevarius kept his notes.

When Goliath abducted Sevarius from Gen-U-Tech, Sevarius dropped his briefcase. It was found by Elisa moments later. She evidently turned it over to the Gen-U-Tech security guard, because Owen later mentioned to Xanatos that it had been found.

Sevarius’s briefcase was gray and monogrammed, except his name was spelled wrong as “Servarius” (he was given a discount for the mistake). ("The Cage") [1]