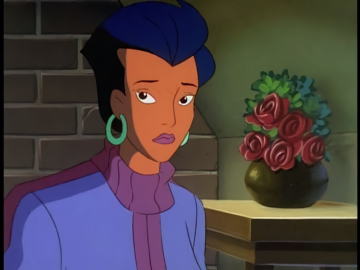 Beth Maza is the youngest child of Peter and Diane Maza, born in 1975. [1] She is therefore also the younger sister of Elisa and Derek Maza.

Beth is currently enrolled in Flagstaff University in Arizona, majoring in Native American Studies. [2] She is very familiar with the myths, legends, and religious beliefs of the Native Americans in the southwest of the United States, particularly those concerning Coyote the Trickster.

Beth first met the gargoyles when the Avalon World Tour brought Goliath, Elisa, Angela, and Bronx to Flagstaff; she worked alongside them and her father to stop Xanatos from capturing Coyote the Trickster. ("Cloud Fathers") In the future, when Goliath and Elisa's relationship is revealed to the Maza family, Beth would "get it". [3]

Beth is the member of the Maza family most willing, after Elisa, to accept the strange and unusual, such as the gargoyles or Coyote the Trickster. Indeed, she recognized Coyote's hand in the adventure at Flagstaff before the others did. Beth is likely to at least attempt to connect back with Carlos Maza's Native American beliefs. [4]

Voice Actor: Monica Allison in "The Cage" and Roxanne Beckford in "Cloud Fathers".

Between her brief appearance in "Deadly Force" and her first full onscreen appearance in "The Cage", Beth Maza appears in "Always Darkest Before Dawn", issue #2 of the non-canonical Marvel Comics comic book series. She also appeared in issues #3-5: "Rude Awakening", "Blood From A Stone" and "Venus In Stone".