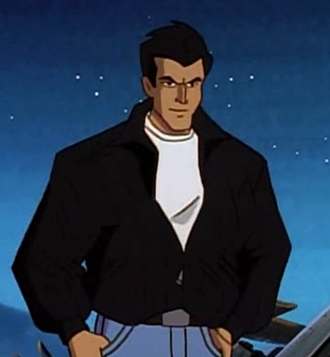 Coyote, in the guise of a young Peter Maza. 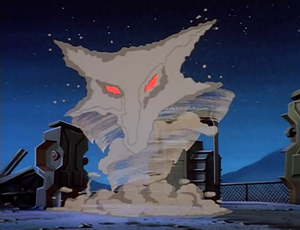 Coyote in his tornado form. 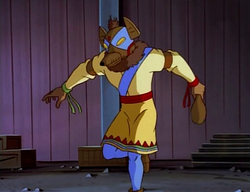 Coyote is a Child of Oberon, and a Kachina.

Coyote is a trickster figure, who has become particularly prominent in Native American legend and in the southwest of the United States, such as Arizona, where the Coyote Carving was made in his honor.

When he was a boy, Peter Maza performed the Dance of the Coyote, a seldom-performed Kachina dance in Coyote's honor, at his father's request. This joined him to Coyote, and when he left Arizona, a part of Coyote went with him. Coyote felt the need to bring Peter Maza back to Arizona, so that they could be at least briefly re-united.

The answer to his need came in 1996, when Xanatos discovered the Coyote Carving and decided to use it as a means of capturing Coyote and gaining various boons from him, such as immortality. He and Coyote 4.0 went to Arizona and began a construction project on the site, for the purpose of threatening the Carving.

This would lure Coyote out into the open, and allow Xanatos to trap him (using Coyote 4.0 for the job, since it was forged from the iron that had once made the Cauldron of Life, and would thus be able to imprison a Child of Oberon). He succeeded in capturing Coyote in the end, but Goliath, Elisa, Angela, Bronx, Beth, and Peter Maza came to the trickster's rescue, and freed him. Coyote afterwards told Peter Maza about their link and his need to bring him back to Arizona, and then departed. ("Cloud Fathers")

Coyote's interests will one day converge with and compete against those of fellow tricksters Puck, Raven, and Anansi. [1]

Coyote has many of the standard traits of a trickster; he is clever, triumphs through outwitting his opponents, and likes to make wisecracks. But he is a benevolent figure at heart, who cares about those humans connected to him (such as Peter Maza), and uses his powers to help protect them. [2]

Coyote's human form (at least, the one documented) looks remarkably like a younger edition of Peter Maza (perhaps as the result of their mystical bond). However, he can also take on the form of a whirlwind (and perhaps also that of an actual coyote). He likes to work subtly, often through manipulating occurrences in such a way that they seem to happen through coincidence rather than through magical intervention.

Coyote the Trickster is a prominent figure in Native American legend. The Coyote of the actual legends is more of a comical buffoon than his animated counterpart, generally portrayed as coming up with ingenious schemes to benefit himself which somehow wind up backfiring. However, at other times, he is portrayed as a culture-hero, who taught humans how to use fire and brought other useful skills to them. The Coyote of Gargoyles clearly echoes this latter interpretation.