The Gathering Part One 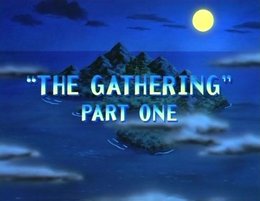 For other uses of the name, see The Gathering.

"The Gathering" Part One is the fifty-seventh televised episode of the series Gargoyles, and the forty-fourth episode of Season 2. It originally aired on April 29, 1996.

The Gathering has begun on Avalon, and Puck is absent. Oberon decides to venture to Manhattan to retrieve his servant. Meanwhile, the Xanatos and Renard families converge at the Eyrie Building to be introduced to their new grandson, Alexander Fox Xanatos. Oberon tracks Puck to the Eyrie building, and sensing Titania, intrudes upon the nursery and reveals that Fox's mother, Anastasia Renard, is actually Titania in disguise. Anastasia convinces Oberon that Alexander should be taken to Avalon to be trained in his magical heritage. The two leave, promising to return in an hour for the child. When Oberon returns, a shield is surrounding the Eyrie Building. Frustrated that he can't penetrate it, Oberon puts all of Manhattan to sleep before growing to an enormous size.

Banshee is dragged by the Weird Sisters to Avalon, where she gets in a fight with Odin. Oberon puts a gag on her that will stay until she learns true humility as punishment for not going to the Gathering.

Titania reveals her story, explaining why she divorced Halcyon Renard and reconciled with Oberon. She then explains that Fox doesn't have magical abilities since she was raised by humans, but that Alexander has potential.

The Avalon World Tour has ended, and Goliath, Elisa, and Bronx reunite with Hudson and the trio, and introduce Angela to them.

Owen knew that Titania and Anastasia were one and the same, so he had previously taken precautions against an attack by them by providing Xanatos with an electrical force field to erect around the building. He provides Xanatos with means to fight against Oberon, informing him of his weakness to iron. Owen then leaves, explaining that he can't get involved in the fight.

Goliath brings Elisa and Cagney home, and once again tries to talk to Elisa about his feelings for her, but she silences him.

Titania goes to the clock tower, and asks the gargoyles for help in protecting Fox and Alexander during the battle. Goliath refuses, then commands the clan to follow him to the Eyrie Building.

"Or, at least what's left of them."
"Well, I didn't know she was coming!" - Broadway and Brooklyn

"We are what we are." - Goliath and Elisa

The Gathering is well underway, after Oberon began proceedings in "Ill Met By Moonlight". The returning Children of Oberon at the beginning of this episode include a number of familiar faces from the Avalon World Tour: Grandmother, Raven, Anubis, Anansi, the Lady of the Lake, Odin, and Coyote the Trickster, all of whom have formed a long line in the great hall, each one in turn doing homage to Oberon anew. The assembly also includes a few new figures: a couple of giants, a winged horse, a centaur, a gorgon-like being, and a figure dressed in dapper-looking clothes (this last, according to Greg Weisman, goes by the name of Nought).

Oberon comments on the events of "Eye of the Storm" when he sees that Odin has recovered his eye.

Banshee, having expressed her desire not to return to Avalon in "The Hound of Ulster", is dragged back by the Weird Sisters. She is permanently gagged, essentially removing her powers, until she learns humility.

Puck also does not return to the Gathering, having revealed in "Future Tense" that he did not want to.

Fox gives birth to a son, Alexander Fox Xanatos. She learned she was pregnant in "Outfoxed".

Titania is revealed to be Anastasia Renard, Fox's mother.

This is also a good episode for familiar faces among the human population of Manhattan; we see once more the Jogger, Travis Marshall, Officer Morgan, and Brendan and Margot, all in brief roles. Travis Marshall now plays the part, not of a reporter on the street as in his past scenes, but of an anchorman as he reports Alex's birth (and in the process, mentions Xanatos and Fox's police records); evidently he must have gotten a promotion.

Goliath, Elisa, Angela and Bronx return to Manhattan at last, ending the Avalon World Tour that began way back in "Avalon Part Three".

Oberon engages in a Star Wars homage when he uses his powers to get past Xanatos's security guard in the lobby in a manner evocative of Obi Wan Kenobi using the Force to get past some Storm Troopers in the first Star Wars movie.

Showing Goliath, Elisa, Bronx and Angela's arrival to Manhattan wasn't produced as their reaction to returning home was similar enough to "Future Tense" (minus the shock of the city being in ruins), as well as showing the return from the PoV of Hudson and the trio. Additionally the skiff sunk into the water and returned to Avalon as it's travelers remained in Manhattan.[1]

"The Gathering" was originally intended as a one-parter, but turned into a two-parter when it became clear that a single half-hour episode was not enough to tell its story.

The yellow nightgown Fox was wearing was a gift from her father. [2]

Terrence Mann's name is misspelled as "Terrance Mann" in the credits.