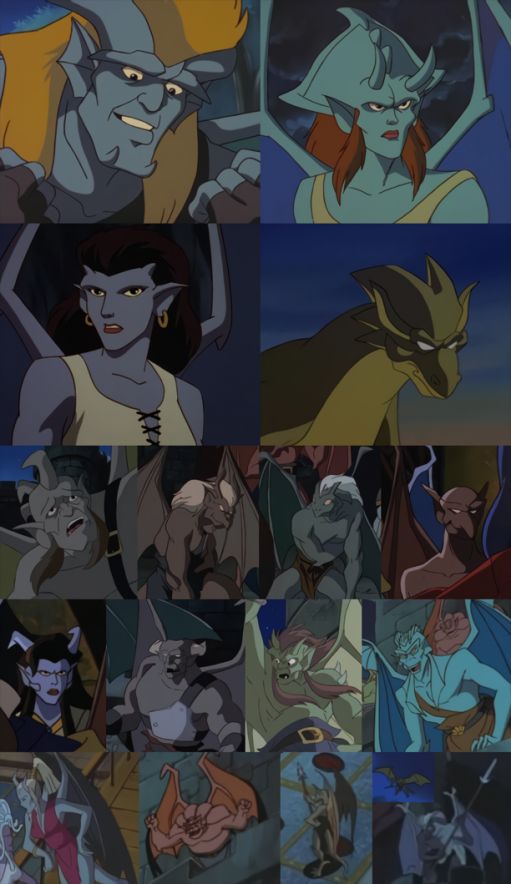 All known members of the Avalon Clan

Avalon Clan is a gargoyle clan that resides on the mystic island of Avalon.

The Avalon Clan has its beginnings with the original Wyvern Clan. After the Magus agreed to cast upon Goliath the same spell of sleep that he had cast upon the surviving members of the Wyvern Clan, he and Princess Katharine vowed to care for the eggs of the clan. Katharine, along with the Magus, and Tom, now nicknamed "Guardian of the Eggs," set off for her Uncle, King Kenneth's castle. They arrived there in 995 but were promptly driven off by a coup staged by Lord Constantine. The Magus took them to Avalon, where (due to the differences in the passage of time) "The Eggs" hatched in 1058 and grew up in peace and isolation. Many, if not most, of the hatchlings were named after angels, while each of the beasts were named after warriors. [1][2] The three humans raised the gargoyles in the manner of rookery parents, attempting to mimic gargoyles customs (which the Magus had some information about). [3] Growing up, the youths were told of their origins and high praise was apparently particularly related of Goliath. This raised his reputation as a leader among the children to near legendary status. ("Awakening Part Two", "Avalon Part One", "Avalon Part Two")

In late 1995, the Enhanced Archmage attacked the clan, injuring many members and threatening to destroy them all. Tom brought Goliath, Elisa and Bronx to the island to help the Clan defeat the Archmage and his allies, the Weird Sisters, as well as his enslaved "troops" Macbeth and Demona. With the help of King Arthur Pendragon, the Clan was able to win the battle and peace on the island was restored. At this time, Angela, the Clan's second-in-command, left with Goliath, Elisa and Bronx to join them in Manhattan. Gabriel, the leader of the Clan, chose his mate Ophelia to be the new second. ("Avalon Part Two", "Avalon Part Three") [4]

Six months later, though about a week had passed on Avalon, Oberon and Titania returned to reclaim the island. Oberon gave the Clan the choice to either leave or be destroyed, but with Titania's aid the Clan not only was given a third option, to defeat Oberon in a hunt, but were also given the clue to defeat Oberon. In the end, though they could have killed Oberon, Tom chose not to and because of this generosity Oberon allowed the Clan to remain and the island, and furthermore they became his Honor Guard, immune from his magic. ("Ill Met By Moonlight")

Grateful to have an official role on the island and the support of Oberon, the Avalon Clan will again be tested in battle upon the return of Queen Mab. [5][6] It is unclear when this event will occur and even whether the Clan will survive, but the Clan will at least exist in some form in 2198. [7][8]

The Clan will become one of the ten founding members of the Gargoyle Nation, and its leader and eggs will be among those kidnapped when the Space-Spawn attack at Queen Florence Island in 2198. [9] It seems likely that Gabriel will be this leader, as less than a decade will pass on Avalon between 1996 and 2198. [10] A select few humans will know about the clan by 2198, without knowing much about Avalon itself. [11]

The members of the Avalon Clan are of the same "Scottish stock" as the original Wyvern Clan and the Manhattan Clan. Out of the original 36 eggs the composition is: