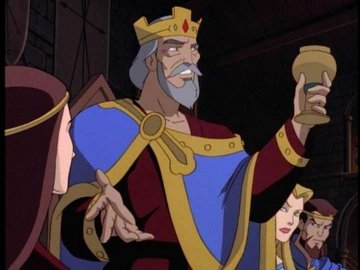 Kenneth II was the King of Scotland from 971 to 995, Prince Malcolm’s older brother, and Princess Katharine's uncle.

Kenneth was the second son of King Maol Chalvim I, half-brother to Duff and Prince Malcolm both. He shared Duff's fortunes loyally in their struggles with Indulf and his son Culen over the Scottish throne from 954 until 967, when Duff was slain in battle against Culen and Kenneth and his family had to flee to England and enter exile there. Four years later, however, with the aid of the Wyvern gargoyles, Kenneth returned to Scotland, overthrew Culen, and became King. ("Once Upon A Time There Were Three Brothers...") 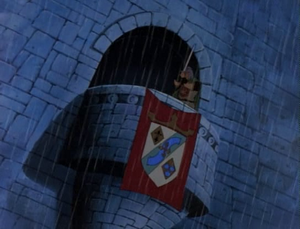 Kenneth reigned until 995. In his old age, he began to dote on the Lady Finella, who did not return his feelings for her. Constantine, the ambitious son of Culen, took advantage of this to dupe Finella into holding a secret meeting with him in the drying-house, where she could tell him in private that she wished to marry Constantine instead of him. [1] When Kenneth entered, Constantine took him by surprise and murdered him. ("Avalon Part One")

Kenneth had one son, Maol Chalvim, who later on became King of Scotland as Maol Chalvim II from 1005 to 1034.

Kenneth II was a historical monarch, who was indeed murdered in 995. The traditional account of his death varies from that given in Gargoyles, however. According to Scottish chroniclers, Kenneth had angered his nobles by wishing to pass the throne on to his son Maol Chalvim, contrary to tradition; in 10th century Scotland, the monarchy was not hereditary. They joined forces with Finella, who in this account hated Kenneth for having slain her son, and arranged his death through a complex mechanical device. Kenneth, after a big dinner at Finella's house (with much wine to drink) was led into a room in which stood a statue holding a golden apple. When he took the apple from the statue, at Finella's request, it triggered several crossbows concealed inside the statue, which shot their bolts at him with lethal consequences.