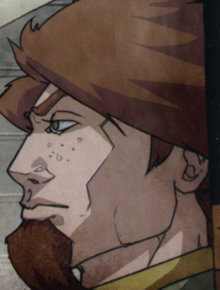 Fergus was the Irish prince who founded Dalriada.

According to a tale told by Shari, Fergus left Ireland around 500, to found the kingdom of Dalriada in Scotland, and brought with him half the Stone of Destiny. Along the way, he came to Carbonek, where he met Merlin and Pelles, and agreed to loan them the Stone for the young Arthur's Sword in the Stone feat. ("Rock & Roll")

One of Fergus's descendants, Kenneth mac Alpin, became the first King of Scotland about three and a half centuries later.

Fergus, also known as Fergus Mor or Fergus the Great, was the founder of the kingdom of Dalriada. He and his brothers, Angus and Loarn, emigrated from the original Dalriada in northern Ireland to Argyll in Scotland, around 500, to found Dalriada; as in Shari's story, Fergus is said to have brought the Stone of Destiny with him. He died in 501 and was succeeded by his son Domangart.