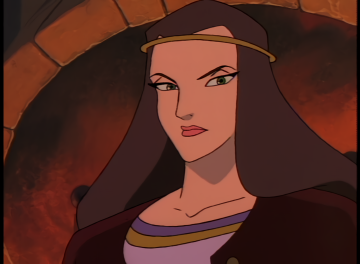 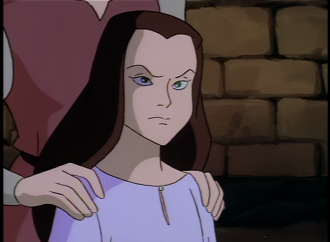 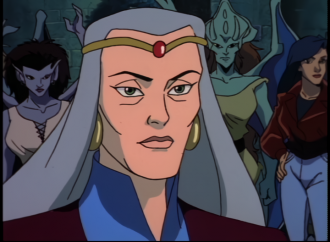 Princess Katharine was the daughter of Prince Malcolm, and ruler of Castle Wyvern at the time of the Wyvern Massacre in 994.

Katharine was born to Prince Malcolm and Princess Elena in 976. ("Vows") [1] From childhood onwards, she disliked and feared the gargoyles (partly because Prince Malcolm foolishly used threats of gargoyles to scare her into good behavior). ("Long Way To Morning") When she succeeded her father to the rule of Wyvern, somewhere between 984 and 994, she made her feelings plain, openly viewing the Wyvern Clan as monsters. When the Captain of the Guard brought Goliath and Demona to her feast celebrating the initial defeat of Hakon, Katharine angrily demoted him, so that he would only report to the Magus rather than directly to her. It was this act that was the catalyst for Demona and the Captain betraying Castle Wyvern to the Vikings.

Katharine was taken prisoner, as were her human subjects; the Captain and Hakon planned to hold her for ransom. But when Goliath and the other surviving gargoyles attacked the Vikings' camp, Hakon angrily attempted to kill her; in the ensuing confrontation, the Captain, Hakon, and Katharine all fell off the top of a cliff, but Goliath saved Katharine's life in time. Katharine, startled by this event, thanked Goliath, and began to understand the error of her ways at last. When she discovered that the Magus had irrevocably put the other gargoyles under a sleep spell (locking them in stone until the Castle rose above the clouds), Katharine made what amends she could by promising to take care of the eggs in the rookery. ("Awakening Part One", "Awakening Part Two")

Katharine took her people and the eggs to her uncle Kenneth II's court in Edinburgh, since it was no longer safe for them at Castle Wyvern. The following year, however, Kenneth was murdered by the ambitious Constantine, who usurped the Scottish throne, and decided to strengthen his claim to it by marrying Katharine. To ensure her cooperation, he threatened to destroy the eggs if she refused. Katharine was left with one hope: she, alongside the Magus, Tom, and the eggs had to flee to Avalon, the only place where they would be safe from Constantine. ("Avalon Part One")

Here, Katharine and her human companions raised "The Eggs". In the years that followed, she and Tom fell in love with each other, and lived together as husband and wife, much to the grief of the Magus, who had been in love with her for years. ("Avalon Part Three")

Raising thirty-six gargoyles was not the reason behind not having any biological children with Tom. Most likely, either she or Tom (or both) had a medical issue that prevented them from having any kids. [2][3]

In 1995, the Archmage and the Weird Sisters attacked Avalon, and Katharine took part in the defense of her home with the rest of the clan, even laying Demona low with her own laser cannon. ("Avalon Parts One", "Avalon Part Two", and "Avalon Part Three") The following year, Katharine also took part in the defense of the Avalon Clan from the returned Oberon. ("Ill Met By Moonlight") She and Oberon are now on reasonably peaceful terms. ("The Gathering Part One")

Greg Weisman originally thought Michael Reaves' spelling of Katharine's name (with two a's) was unusual but figured that just made it special. As it would turn out, the original spelling was likely just a typo (Michael has no specific memory about it), but Greg has chosen to keep it, as that is how the first episode credits the Princess' name. [4]