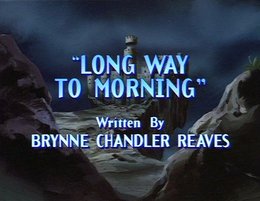 Demona attempts to poison Elisa in a ploy to lure Goliath to the Old York Opera House so that she could kill him and take over the clan. Goliath, hoping he could somehow get through to Demona, brings Hudson along to confront her. Demona shoots Goliath, badly injuring him, and Hudson is forced to protect Goliath while being pursued by Demona in the opera house, in an underground waterway, and in a graveyard. He's able to keep her at bay until sunrise so that Goliath is healed the next night. Demona flees, and Hudson realizes that despite his old age, he is still a capable warrior.

Hudson dreams of a flashback from 984 when the Archmage poisoned Prince Malcolm, and Hudson fails to protect him. The young Princess Katharine blames Hudson, while the Magus declares the only cure can be found in the Grimorum Arcanorum.

The flashbacks continue while Hudson reminisces with Goliath to keep his spirits up. Intent on getting the Grimorum from the Archmage, Hudson enlists the young Goliath and Demona to go with him to the Archmage's cave. The three gargoyles battle with the Archmage, resulting in Hudson's scarred eye. Goliath saves the book before it falls into a chasm, and the Archmage seemingly falls to his death.

During the trek to the Archmage's lair, Demona argues against Hudson being leader of the Wyvern Clan to Goliath.

The prince is cured thanks to the gargoyles' efforts, and Hudson promotes Goliath to leader of the clan.

"Why, revenge of course." - Malcolm and Archmage

"I can face her. I just can't beat her." - Goliath and Hudson

"Nonsense. There are years of fighting left for you."
"Now there's something to look forward to." - Hudson and Goliath

The Magus (here ten years younger than in his original appearance in "Awakening") and the Captain (in a non-speaking role) both have cameos in the flashback scenes.

Prince Malcolm, Princess Katharine's father, is introduced for the first time in this episode. It is revealed that, although Malcolm himself is on friendly terms with the gargoyles, he is partly responsible for Katharine's disdain towards them shown in "Awakening Part One". A younger Malcolm appears in the episode "Vows".

The Archmage is introduced in this episode as a Dark Ages antagonist of the Wyvern Clan. Although the Archmage apparently falls to his death, "Avalon Part Two" reveals that he survived by means of a time-travel loop.

Hudson is blinded in one eye by the Archmage, and subsequently appoints Goliath to be leader of the Wyvern Clan.

Brooklyn displays a strong element of bitterness towards Demona stemming from "Temptation", strong enough that Goliath thinks it better to leave him behind at the clock tower.

Hudson's remark to Demona that his age has taught him how to wait takes on a new meaning after "City of Stone", in which it is revealed that she has been alive for a thousand years and has still not learned that lesson.

At the end of this episode, Demona believes that Elisa is dead, and she will not encounter Elisa onscreen again until "Reawakening".

Hudson reveals in this episode that gargoyles dream while in stone sleep.

On the DVD set, this episode is titled The Long Way To Morning.

This episode was adapted as a novelization titled Gargoyles: Demona's Revenge.

They cut the scene where Hudson makes a torch. Instead of showing him wrapping the rag around the stick and knocking two rocks together, it cuts from a view of the Archmage's cave to the glow of torchlight on Hudson's face.