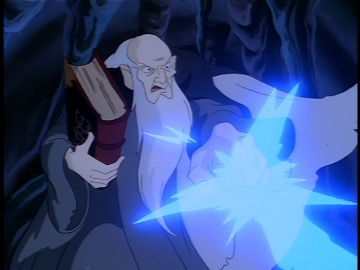 The Archmage attacking with his signature Lightning Spell. 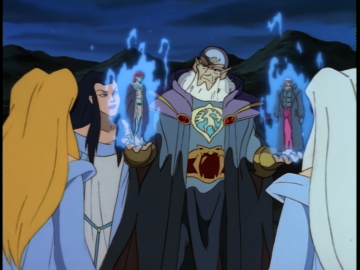 The Archmage was an evil sorcerer in 10th century Scotland.

The Archmage was born in 914. [1] His real name is unknown, but he entered Prince Malcolm's service around 971, establishing himself as an invaluable ally. [2][3] He even helped the Prince build Castle Wyvern. [4] Already, however, the Archmage had treachery on his mind. As early as 971, he entered into an alliance with Iago, combining the Archmage's magical knowledge and Iago's cunning for various ends. [5][6] Also during this time, Demona approached the Archmage and secretly entered into his service as his apprentice, treating her mainly as a servant, with considerable contempt and cruelty. [7][8]

The Archmage's goal, by 975, was to gather together the Grimorum Arcanorum, the Eye of Odin, and the Phoenix Gate as a means of making himself almost invincible. Apparently he got the idea to combine these talismans from an outside source, possibly someone else had done this before. [9][10] He already had the Grimorum in his keeping, but still needed to obtain the other two magical artifacts. When Princess Elena brought the Phoenix Gate to Castle Wyvern as her dowry for Prince Malcolm that same year, he attempted to seize it from her, first by sending bandits to ambush her, and then sending Demona to steal it for him. But Xanatos and Fox defeated the bandits, and Demona, instead of giving the Gate to the Archmage, kept it to share with Goliath. The Archmage, convinced that she had lost the Gate, cast her off from his service. ("Vows") In 982, the Magus began to serve as his apprentice. [11]

By 984, the Archmage finally rebelled against Prince Malcolm and tried to depose him, but was defeated and banished. He returned in a vengeful mood, however, and struck Prince Malcolm down with a poisoned blow-dart. Since he still had the Grimorum Arcanorum in his possession, which contained the spell necessary to provide an antidote for the Prince, Hudson, Goliath, and Demona pursued him to his nearby cave to recover the book. In the ensuing battle, the Archmage permanently blinded Hudson in one eye, but lost the Grimorum to Goliath, and while charging at him, stumbled and fell into a chasm, seemingly to his doom. ("Long Way To Morning")

But the Archmage did not perish, although that was what Goliath, Hudson, and Demona believed at the time. Before he could strike the bottom of the chasm, a powerful wizard who bore a striking resemblance to him appeared and saved him, then revealed that he was a future form of the Archmage, having finally achieved the ultimate power that he had coveted for so long. This "future Archmage" then whisked his former self off to the year 995, to obtain the aid of the Weird Sisters in gaining the Grimorum, Eye of Odin, and Phoenix Gate, then to 1020, to have the Sisters recruit Demona and Macbeth for his cause. At last, he took himself to Avalon in 1995, where the Sisters presented the "original Archmage" with the three magical artifacts. The Archmage donned the Eye of Odin and was transformed into a nearly all-powerful sorcerer, then devoured the Grimorum Arcanorum in order to bring it into Avalon with him, and finally took up the Phoenix Gate. Now transformed into an exact duplicate of his future self, he led the initial attack on the Avalon Clan, hoping to use Avalon as his base for conquering the world. After the first battle, he then went back in time to rescue his former self, thus entering the time loop again. ("Avalon" Part Two)

After seeing his former self depart for the year 984, the Archmage attacked the Avalon Clan again. He almost destroyed it, but fortunately, the full fury of his hatred for Goliath defeated him; he foolishly made his assault during the night instead of waiting for morning when the Avalon gargoyles would be stone, and also, when he faced Goliath head on, instead of immediately destroyed him, merely contented himself with magically torturing him. This oversight gave Goliath the opportunity to finally snatch the Eye of Odin from the Archmage's brow. Once the Archmage lost the Eye, he could no longer contain the Grimorum's energies inside him, and was destroyed in the ensuing magical conflagration, alongside the Grimorum itself. ("Avalon" Part Three)

At some point during his travels trough time, the enhanced Archmage encountered a timedancing Brooklyn. [12]