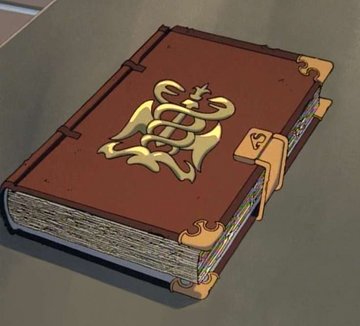 The Grimorum Arcanorum is the spell book used to turn the gargoyles to stone for a thousand years.

It was originally written during the reign of Caesar Augustus (27 B.C. - A.D. 14) by his chief advisor, the original Magus. [1] It was the most powerful and comprehensive book of mortal spell books in existence. There are spells that may have even been contributed by Merlin himself. [2]

It passed from hand to hand until, by 975, it was in the possession of the Archmage. When the Archmage was banished from Castle Wyvern in 984 for attempting to overthrow Prince Malcolm, he took the Grimorum with him, but Goliath, Demona, and Hudson pursued him to his cave and recovered it after the young Magus needed a spell from it to cure Prince Malcolm from the Archmage's poison. ("Long Way To Morning")

The Grimorum remained in the Magus' possession for the next ten years, until Hakon sacked Castle Wyvern. The Viking leader then seized the book and, contemptuous of its magic, began tearing pages out and burning them. When the gargoyles came to the rescue of Hakon's human prisoners, the Magus, blaming them for Princess Katharine's apparent death, used a spell from the Grimorum's pages to put them into stone sleep "until the castle rises above the clouds". When he discovered that Katharine was alive and had been rescued by Goliath, he repented of his act, but since one of the pages that Hakon had burnt was the one with the counterspell written upon it, he could not undo his work. All that he could do was to turn Goliath to stone with that same spell, at the gargoyle leader's request. ("Awakening Part Two")

The Magus took the Grimorum with him to Kenneth II's court, and used its properties to disguise the Eggs and help Princess Katharine escape after Constantine III's coup the following year. Using a spell from its pages, the Magus brought himself and his followers to Avalon, where their way was barred by the Weird Sisters. The Magus used the Grimorum to reflect an attack spell of the Sisters back upon them, changing them into owls, but because the Grimorum was powered by human magic rather than by Third Race magic, he could not bring it into Avalon with him. Knowing that he had to keep it out of Constantine's hands because of the spell that opened the way to Avalon, he entrusted it to Mary and Finella, to keep it safe. ("Avalon Part One", "Avalon Part Two")

Mary and Finella returned with the Grimorum to Scotland. Constantine pursued them, hoping to recover the book and use it to reach Princess Katharine on Avalon; so, too, did his hired sorcerer, Brother Valmont, who, like the Archmage, coveted the Grimorum as one of the Three Keys to Power. At the Battle of Rathveramoen, Valmont seized the Grimorum from Finella and used it to conjure up a rain of fiery arrows from the skies that slew many of the combatants on both sides, including the mate of Demona's Second, Magus the horse, and Mail Brigti. Brooklyn seized the Grimorum from the treacherous sorcerer, however, and Demona used a counter-spell to halt the rain (though those slain by the arrows remained slain). Brooklyn afterwards tricked Demona into returning the Grimorum to him and Finella, after which the Phoenix took them and Mary to the United States in the 1970s. [3] They later on gave it to Xanatos, who kept it, housing it in Castle Wyvern after it was moved to the top of the Eyrie Building. [4]

Shortly after the gargoyles' awakening, Demona tricked Brooklyn into stealing the Grimorum for her so that she could use it to seize control of Goliath, turning him into a zombie slave. Brooklyn, when he discovered what he had done, recovered the Grimorum from her, but she managed to tear a few pages out of it first, to save for later. ("Temptation") She used one of the spells that she had thus stolen to help create Coldstone, and another later on to place her "stone by night" curse upon New York City. ("Reawakening", "City of Stone Part One")

When the gargoyles had to leave Castle Wyvern for the Clock Tower, they took the Grimorum with them. ("Enter Macbeth")

They kept it safe until Demona and Macbeth stole it under the influence of the Weird Sisters, after which the Sisters presented it to the Archmage. Since the evil sorcerer could not bring it into Avalon with him directly, he ate it, thus making the Grimorum a part of him and absorbing its power. But when Goliath tore the Eye of Odin from the Archmage's brow, the Grimorum self-destructed, and destroyed the Archmage with it. ("High Noon", "Avalon Part Two", "Avalon Part Three")

The Grimorum's name is Latin for "Grimoire [spell book] of Secrets." It contained not only many spells but even a magical record that included an account by the Magus of how he had cursed the clan in 994 and likely his journey to Edinburgh with Princess Katharine and Tom as well. [5][6]

One page is known to still exist, and it is in Demona's possession. [7] 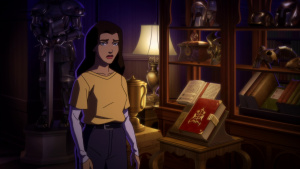 In the "Young Justice: Phantoms" episode, “Nomed Esir!”, the Grimorum (along with the Phoenix Gate and the Eye of Odin) makes an appearance in Jason Blood's collection of magical artifacts. He insists that Mary Marvel not touch it.